My concerns for Jeremy regarding Brenda’s death were entirely different from the ones I had for Jackson. I knew his behavior would be on par, that he could endure the travel schedule, the make-shift sleeping arrangements and all that was required of him throughout the week.

Jeremy is a thinker. He will ponder something at length until his brain is satisfied with an explanation, but until he’s satisfied, he has a seemingly endless list of questions on the topic. This is precisely why we’ve kept him mostly in the loop regarding Brenda’s health over the last two years. He appreciates the honesty, so with every major event we’d tell him a child-size version. He always had questions and we’d answer them until he was satisfied.

When I sat the boys down that Monday afternoon to tell them she’d passed away, I knew I’d be opening the floor for questions from Jeremy. The first thing he wanted to know was when she died –  at exactly what time and what was he doing when she left this earth (“It was around 3:30 in the afternoon and you were playing Lego Batman,” I said.) Then he wanted to know our travel plans and what he needed to pack. He was methodical, helpful and did not cry. I  knew he wasn’t void of emotion. Rather, he needed time to think.

We arrived at the Miller’s house in Chattanooga while the first visitation was already in progress, so we quick-changed and drove straight to the funeral home. As I monitored Jackson’s four-year-old unpredictable behavior, I equally watched Jeremy’s face for a change in emotion. I was waiting for tears, a look of fear, or perhaps an expression I’d not seen before on his young face. Instead, he looked perfectly fine. Jeremy hugged Hayli and Tami, then let Bill embrace him over Brenda’s body and explain that she was finally in heaven. I watched from afar and tried to listen, but I couldn’t make out everything that was said. I just held my breath.

Minutes later he ran back to me and I scanned his eyes. There was no change. I asked him if he was okay and he said casually, “Yeah.” Short and blank.

“Do you want to stay in here or go with Jackson and me to the playroom?” I asked, searching for something in his voice to give me an idea of what he was feeling.

“I’ll stay,” he says, and promptly returned to the front of the receiving line alongside the family.

Throughout the night he’d come back to the playroom to see us, but he never lingered. I couldn’t tell if he was bored, nervous or keeping his body busy while his brain chiseled away what he had seen. At bedtime, I realized it was the latter. Jeremy was whiny and tired but refused to go to sleep, so I finally asked, “Do you have questions?”

“Yes,” he said choking down tears. So Chuck and I sat down with him in the upstairs hallway and gave him the floor to speak.

None of the questions he asked pertained to spiritual matters, which means he either hasn’t thought about them or he’s content with the simple explanation that “Nana’s in heaven.” Instead, he wanted to know about her body, the process of burying her, and what purpose the casket served. True to his personality, he wanted to know the mechanics of death, and it was a great task to convert the truth into a version he could understand. Exhaustion eventually set in and we had to close the conversation for the night, but we both knew it wouldn’t be the end of it.

The same thing happened the following night in Maryville, as Jeremy split his time between standing next to the casket with family and sitting with Jackson and me in the playroom. When it was time for the funeral service, he sat perfectly still and emotionless, looking sharp and mature in his sport coat. Jeremy was friendly and cordial towards the extended family members and managed to keep the fidgeting to almost nill.

It was towards the end of the service that I started to notice a change in his face. His eyes looked glassy and his cheeks looked flush, so I motioned for him to move from sitting between Bill and Tami to sitting between Chuck and Jackson, closer to me so I could touch him, whisper, “Are you all right?” and get a closer look at those bright blue eyes. He was finally feeling it.

The service ended and it would be the last time we would see Brenda’s body. Everyone filed out, hugged goodbye and soon it was only the immediate family in the chapel. Chuck took Jackson out to the car and Bill slowly meandered down the hall. It was late and everyone was tired.

But Jeremy wouldn’t come with me.

“This is the last time I’ll see her?” he asked.

“Yes, they’ll close the casket for the burial tomorrow,” I explained. His eyes welled up with tears as he turned from me to her. We were at the back of the chapel, some thirty pews away, and he wouldn’t leave.

“Are you sure? You want just a few more minutes?” I asked.

He nodded and I stepped through the doorway into the hall leaving my seven year old alone in the chapel. Jeremy leaned against the last pew, his tiny hands gripping the wood, resting his chin along the rim. At the front of the room was Brenda’s body and he spent one solid minute staring at her for the last time. And then the tears came.

I could hear his sobs from the hallway, which made my own eyes well up with tears. He cried hard, as though he’d been waiting for a moment’s peace to take care of it alone, and after the sobbing ceased, I heard him say aloud, “Bye Nana.”

He walked swiftly to where I was sitting, next to the sign-in book by the chapel door, and buried his face on my shoulder. I squeezed him tight and said nothing. There was nothing really to say. Jeremy wiped his face and I helped him blow his nose, and then I asked if he’d like to sign the guest book on his own. 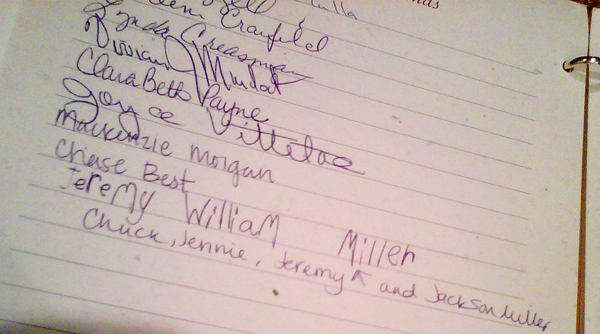 The rest of the night, and the rest of the week for that matter, was perfectly fine. He was back to his stoic self in public and his silly self around us. His face was solemn at the burial on Thursday but he didn’t have anymore questions. In fact, we haven’t talked about Brenda’s passing since we returned to Amarillo.

I have no doubt that Jeremy has thought about her funeral in the two weeks we’ve been home, but it’s not been enough to approach me about it. If my suspicions are true, he’ll strike up a conversation at the most random moment, in the most ordinary of situations, and I’ll need to have my words at the ready to explain whatever needs explaining. Until then, I’m exceedingly proud of him and the maturity Jeremy exhibited that week. Perhaps it was a sweet foreshadowing of the man he will become.