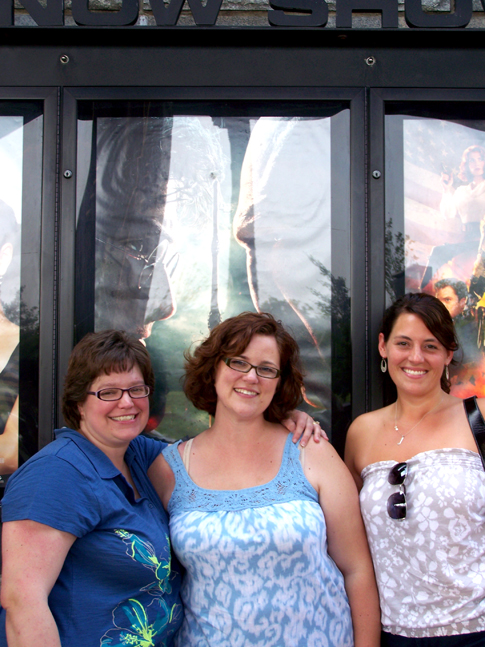 I misspoke in the last post. Upon uploading the photos from my camera, I discovered not 463 photographs to sort through but 510. Good grief. Someone should’ve told me to chill out.

Naturally, I can only share a fraction, and it’ll be a small fraction. We’ll start with Chapter 1: Washington DC. It shouldn’t surprise you that our stay in the nation’s capital was planned around the release of the last Harry Potter film. In keeping with Girls Weekend tradition with Susan and Lesli, we had to see it together, and that meant waiting an extra two weeks until we could all be in DC at the same time.  It was bittersweet to see the last movie together – not just for reasons of loving the books and films, but also because we’ve shared this tradition for nearly a decade. Girls Weekends will continue, but Harry will not longer be a part of them.

(Bummed about the glare on the movie poster!) In addition to HP7 Part 2, what also made this weekend special was getting all of our families together. Not only had the three husbands not been in the same room since Lesli and Jimmy’s wedding day in October 2000, but the four children had never formally met. Sure, babies have traveled and such, but Jeremy and Jackson had never spent time with Avery (Susan’s daughter), and they’d only spied on Henry (Lesli’s son) briefly in our living room a few months ago. Basically, our little core of three has sprouted to 10 and it was nice to have everyone under one roof.

Of course, being in DC warranted two other things: seeing some of my extended family (grandparents, aunts, uncles and cousins!) and touring national monuments and museums. In total we spent five days there, and we squeezed out every ounce of energy the boys had.

After DC, we drove to Philadelphia to stay with my parents for a few days and see a few historical sites downtown – like the Liberty Bell, Independence Hall and the gravesite of Benjamin Franklin. Then, we left the kids and escaped. But more on that later.