Though we could technically still get a snow storm, it feels like spring is here, especially since scary tornado weather is visiting. Yesterday we were under a tornado watch (then a warning) until 8 p.m., and the weatherman is saying tomorrow will be much the same. Unlike in Amarillo, I am so very thankful to have a basement here.

Tomorrow is supposed to be the start of Girls Weekend Spring 2012 at Susan’s house in Middle Tennessee, but the weather could throw a nasty wrench in that plan. Lesli’s flight from DC will surely be delayed if last night is any indication of tomorrow night. I need Girls Weekend, but I also need not to be in a car wreck from twisters on the interstate.

The plus side of spring’s arrival is that it brings perfect running weather. With the race just weeks away, I decided to replace my running shoes now (which were nearly a year old and had more than 600 miles on them) so I could break them in before race day. I am definitely a Running Shoe Snob. Having years ago tried New Balance and Mizuno with much dislike, I went back to Asics – specifically to the Gel-Nimbus, which has asymmetrical lacing. LOVE asymmetrical lacing!

See how the lacing is on a slight diagonal, shifted towards the inside of the foot? This has completely eliminated any and all soreness in the top part of my feet after super long runs.

Or as Asics puts it, “The function of this new lacing system is to align the medial and lateral quarter-panels evenly on either side of the bony topline of the foot. The benefit is an upper that moves more efficiently with the foot, minimizing the potential for irritation.” 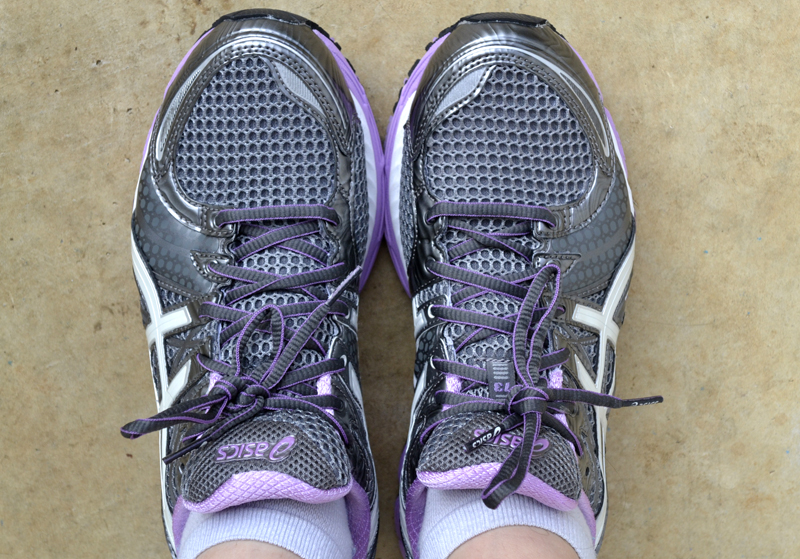 Sorry for the gushing. In other news that the grandparents will care about, the boys and I are nearly finished with our salt dough formation of the United States. After making Tennessee, they wanted to make 100 other things, so we compromised on the major landforms in the US. Pictures to come.