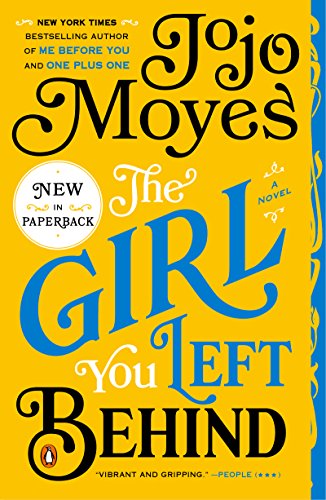 We’ve begun our second week of school and if the boys keep at this pace we’ll be finished by March. Not really, but they are zooming through the first few units of math. Things will slow down when we hit fractions and multiplication hard core. Jackson dances around saying, “Multiplication is easy peasy,” but he’s only started with zeros and ones. I’m letting him enjoy the little victories.

As for my school, I’m loving it. Genre writing is the perfect class to take while finishing the novel for my capstone. Right now we’re reading a brainless romance novel, but next on the list is Gone, Baby, Gone. It won’t be a fresh read since I’ve seen the movie, but I expect it to be good.

Speaking of books, prior to the start of the fall semester I finished The Girl You Left Behind by Jojo Moyes. It was recommended to me a few weeks ago when I asked friends on Facebook to suggest their current favorite reads. The story is a lively mix of historical and contemporary fiction that revolves around the portrait of a French woman, titled appropriately The Girl You Left Behind.

The book begins with Sophie Lefèvre, who runs a hotel in a small French town in 1916 during the German occupation. Her husband, Édouard, is away fighting in the war but has left his wife with a sweet reminder of their love for one another – an informal yet irresistible portrait he painted of her. The painting is all well and good until the German Kommandant takes notice of it. Subsequently, Sophie and the Kommandant become uncomfortably intertwined.

Fast forward nearly one hundred years and The Girl You Left Behind hangs in Liv Halston’s house, a comforting yet cruel reminder of her dead husband who bought the portrait for her as a wedding gift. Liv is in a pit of mourning and complacency when she is threatened with losing the portrait on account of restitution.

Though there’s a bit of predictability with how the book will end, the mystery is all about discovering how the portrait went from hanging on a hotel wall in 1916 France to an unrelated widow’s home in London a century later. There’s also a some suspense when it comes to finding out what happened to Sophie, who disappeared the same time as her portrait.

Overall the book was an enjoyable read and it was the first I’ve read from Jojo Moyes. Her writing is fluid and descriptive, and even though a few of things I suspected early on came true, my attention was kept until the final page because the unfolding of the portrait’s story was so interesting.

In other news, is it autumn yet?

3 Replies to “School update and a book review”