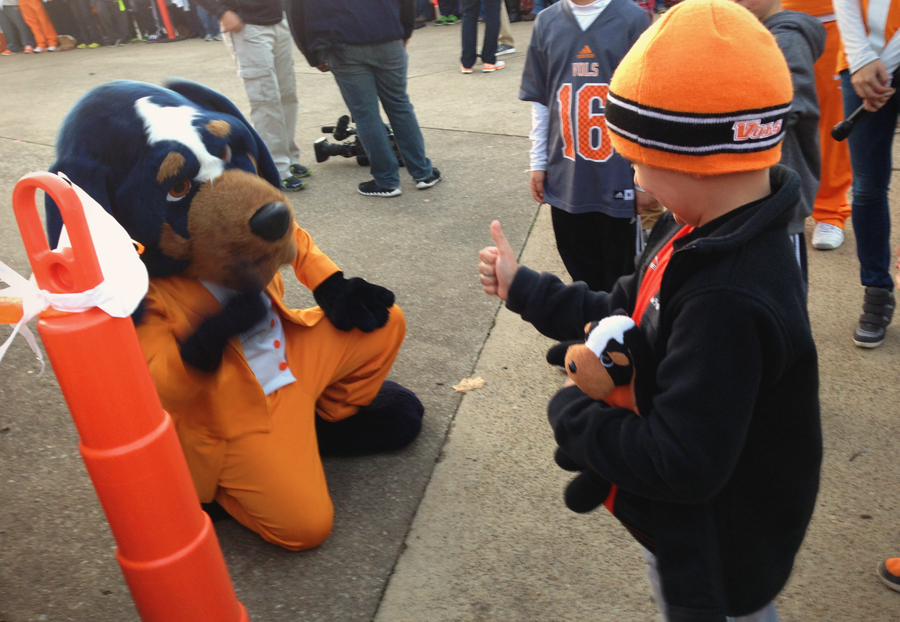 We went to the Vol Walk yesterday and had THE BEST TIME. It all started when we met Smokey X.

Chuck took the photo because he was the only one who wasn’t swooning over this dog. I eyeballed every inch of his fur to see how similar his coat is to Major’s. They could be from the same litter for sure, but we decided Major was bigger in bulk and not nearly as well behaved.

The second most amazing thing that happened is the boys got to cross over the flags, which separates the players from the fans, because of an invitation by Barb Jones – the First Lady of Tennessee Football.

At first, her face didn’t register with me. We were situated behind the flags in hopes that we’d get a good look at Coach Butch Jones and the players as they walked from the bus to the stadium. The longer we sat waiting, the more people shuffled over us to stand on the other side of the flags, therefore obstructing our view. It can be discouraging since parents try really hard to find a good spot for short kids to see! Just as I sat there thinking we’d chosen the wrong spot, a dark-haired woman walked over to me and said, “Why don’t you bring your boys over here with us so they can see the players? I feel really bad standing in front of them.”

I look at Chuck, he shrugs sure, why not? We cross over the flags and stand with about 20 other people who seem far more important than us. I tell her thank you right away and have the boys introduce themselves. They shake hands and she guesses their grades. Finally, I reach out my hand, “I’m Jennie,” to which she replies, “I’m Barb.”

I didn’t recognize her behind her aviator sunglasses, nor did I realize that we were standing alongside coaches’ families.

But we were. Barb shooed the boys forward to stand next to her youngest son so they could be front and center to slap hands with the football players as they walked by.

And then, we met the Other Smokey! He engaged with Jackson and played with the small Smokey stuffed animal he brought to the game. Lil’ J nearly lost his mind.

I squatted down so I wouldn’t block other fans and took pictures like crazy of our boys giving well wishes to the team.

I am so grateful to Barb Jones for seeing Jeremy and Jackson and pulling them out of the crowd for this special treat. We will never forget it!

Finally, we stayed to hear The Pride of the Southland Band, my personal favorite. I love hearing each section play its part. Even though we lost to Missouri last night, my heart swells with pride whenever I hear Rocky Top.