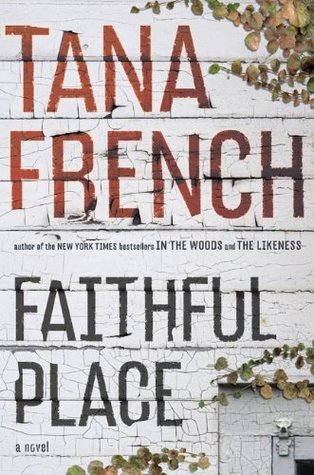 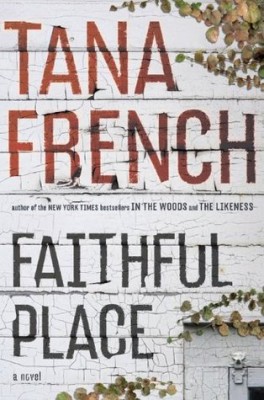 When I read In the Woods, I didn’t know it was part of a series about Dublin murder cases, but alas, it is. In Faithful Place, Frank Mackey is our grouchy protagonist who went into police work after running away from his ghetto neighborhood at nineteen years old. He intended to run away to England with his girlfriend, Rosie, but when she didn’t show up on the get-away day, he assumed she lost her nerve.

Her body is discovered years later in an adjacent townhouse and Frank is determined to find out what happened to his first love.

A few things I loved: the crazy family dynamic, the gruffness of Frank’s discontent, the poetic way Tana French describes each scene and character…

The thing I didn’t like: The lack of suspense. Just as soon as the investigation got underway I knew who killed Rosie. It poured out of the pages with such clarity that I was sure a twist or turn would yank away my suspicions. But no. The person who I thought did it actually did it, so when the confession came, I wasn’t blown away. (That wasn’t the case for In the Woods, by the way. That one had me on edge.)

Don’t get me wrong – Tana French is a beautiful writer. Case in point, this first paragraph of Chapter 4:

The rain had slackened off to a faint damp haze, but the clouds were getting denser and darker; there was more on the way. Ma was pressed up against the front-room window, sending out curiosity rays that practically burned my eyebrows off. When she saw me looking in her direction, she whipped up a J-cloth and started furiously cleaning the glass.

French writes with careful cadence, the sort of rhythm that makes each sentence easy to read. I don’t know a thing about living in Dublin but French makes me think I do. Everything is so well described that almost nothing is left to the imagination. Not everyone loves that sort of writing, but I do. I want to submerge myself in a setting so that I actually live there for the duration of the book.

Perhaps it was her attention to detail that made the criminal so obvious. The character jumped off the page immediately, so much that I even thought, “Surely it’s not this person. That would be too obvious.”

In the Woods was a better book, but French’s writing is impeccable all around.