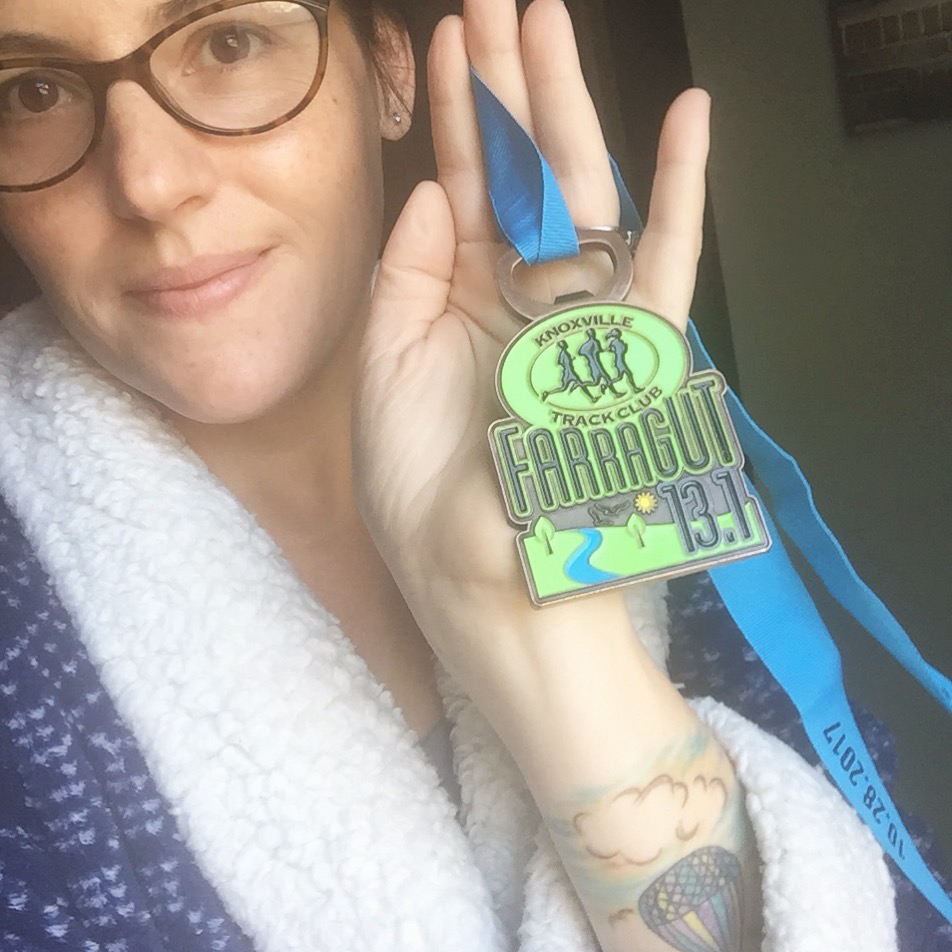 In the interest of time and space, here’s a recap of how I ran 13.1 miles in the pouring rain and ruined my phone, how we celebrated Halloween and Salem’s Supposed 10th Birthday, and why I’m taking another stab at National Novel Writing Month with my third novel.

My goal to run 20 half marathons by the time I turn 40 is moving along nicely. On Saturday, the day it monsooned in East Tennessee, I ran my 17th long-distance race. Before readying my cell phone for a wet run in ziplock baggies, I snapped this photo of the windshield. 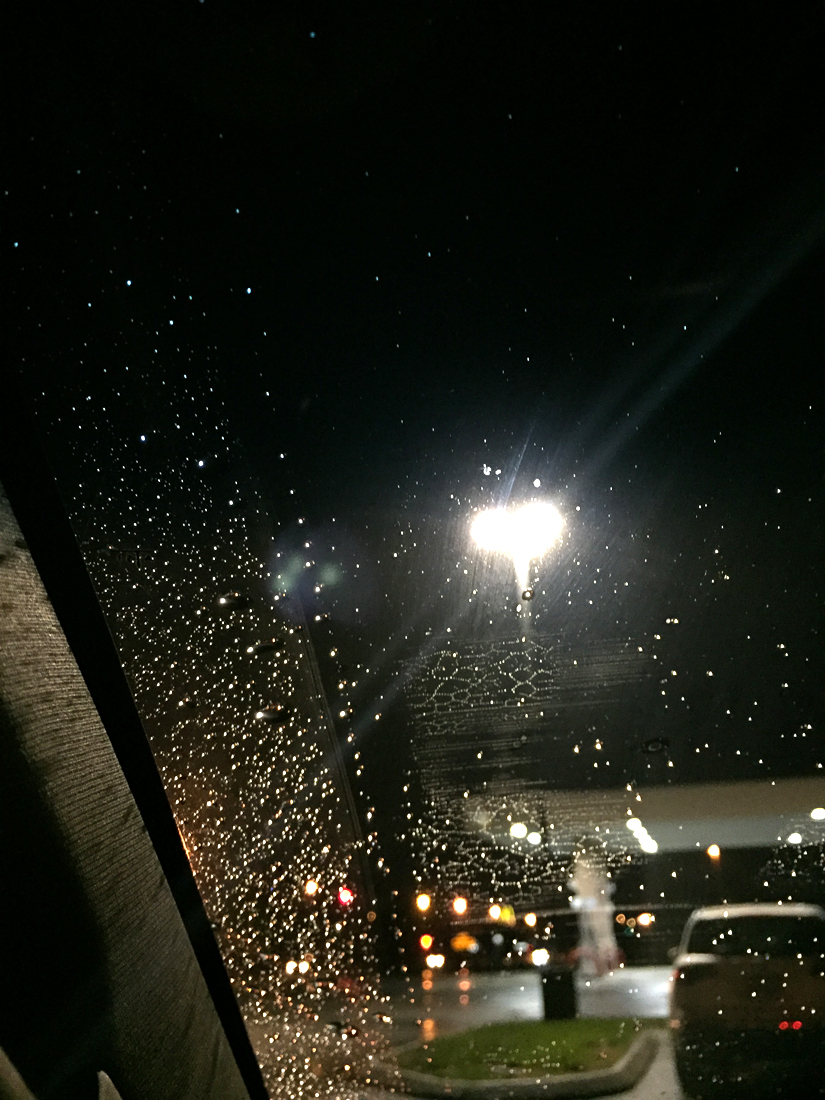 Fast forward two and a half hours and I crossed the finish line fully drenched but pleased with my run. It wasn’t until I was safely back in the car that I realized water had seeped into the baggie and, therefore, into the phone.

I tried to make a call and couldn’t. The camera wouldn’t work. The speakers wouldn’t work. I was so mad at myself for deciding to run with the phone. I thought listening to an audiobook would distract me from the rain (it did!), but I also thought I’d taken enough precautions to keep my phone dry (I didn’t!). I drove home and immediately put the phone in a bag of dry rice for 24 hours.

The screen is streaked and the phone works fine, from what I can tell, but the forward-facing camera still does not work, which is the CRUELEST IRONY OF ALL for a photographer. 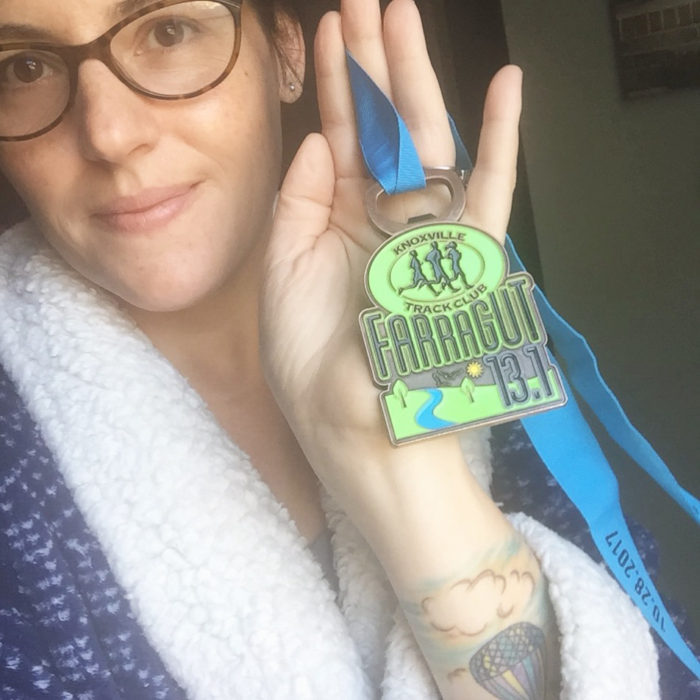 In between the race and Halloween, Chuck, Jackson, and I binged the second season of Stranger Things. (Jeremy opted out.) I loved it as much as I hoped to, but I was disappointed in the amount of profanity in the second season, particularly since Jackson was watching. Every episode I reminded him, “We don’t talk this way, remember?” It was just too much, and frankly, unnecessary. That complaint aside, I thought the plot of Season 2 was an excellent continuation from Season 1, particularly with the inclusion of Max. (I could’ve done without Max’s brother and about 85% of Episode 7.)

This, by far, was my favorite scene. I melted: 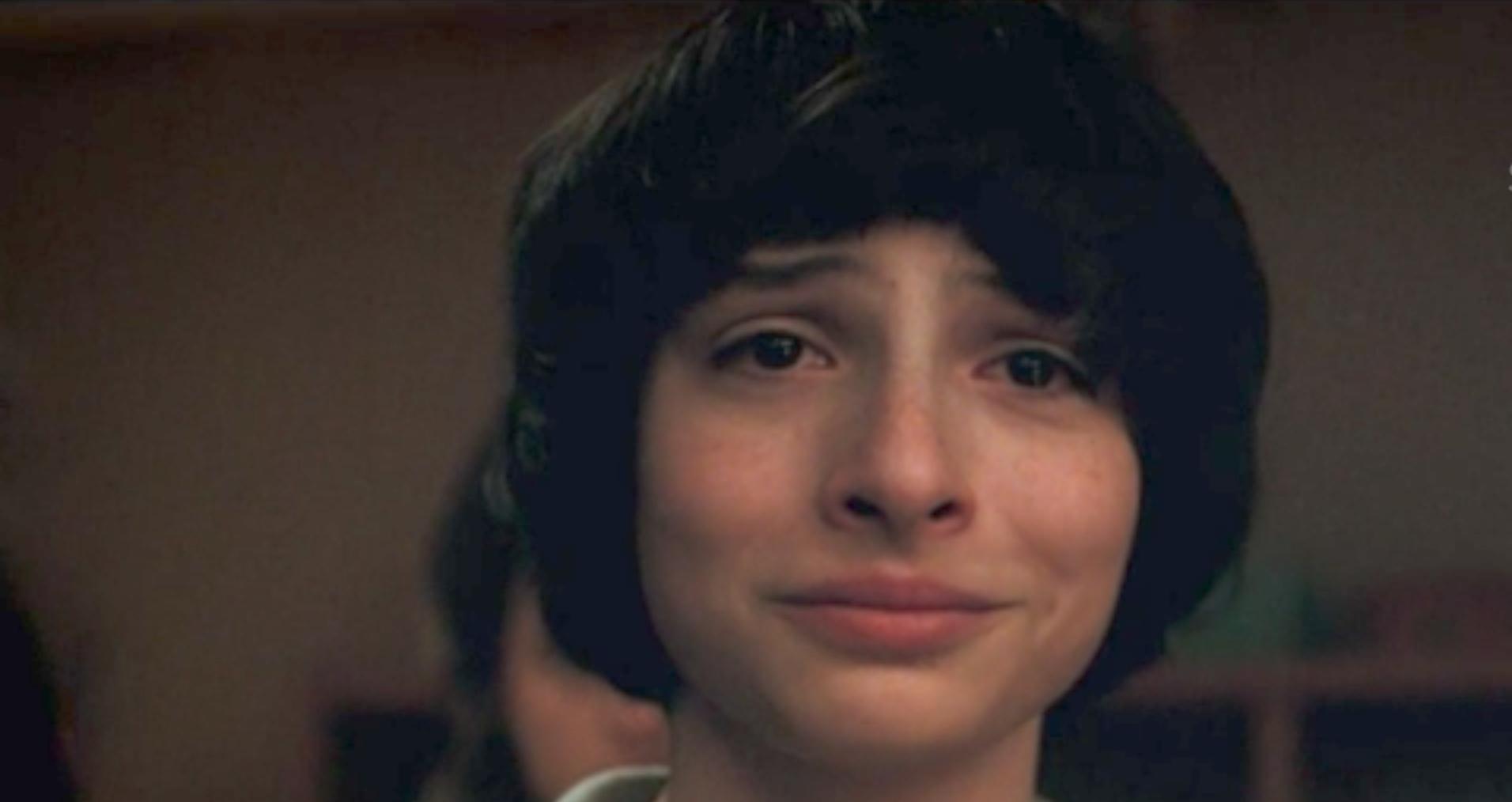 Halloween rolled around and we took Jeremy (as Ron Weasley) and Jackson (as Big Nate – his imaginary best friend and book character) to our friends’ house to trick-or-treat. I don’t have a photo of them because I didn’t bring a camera.

Actually, that’s not true. Here is a photo from trick-or-treating: 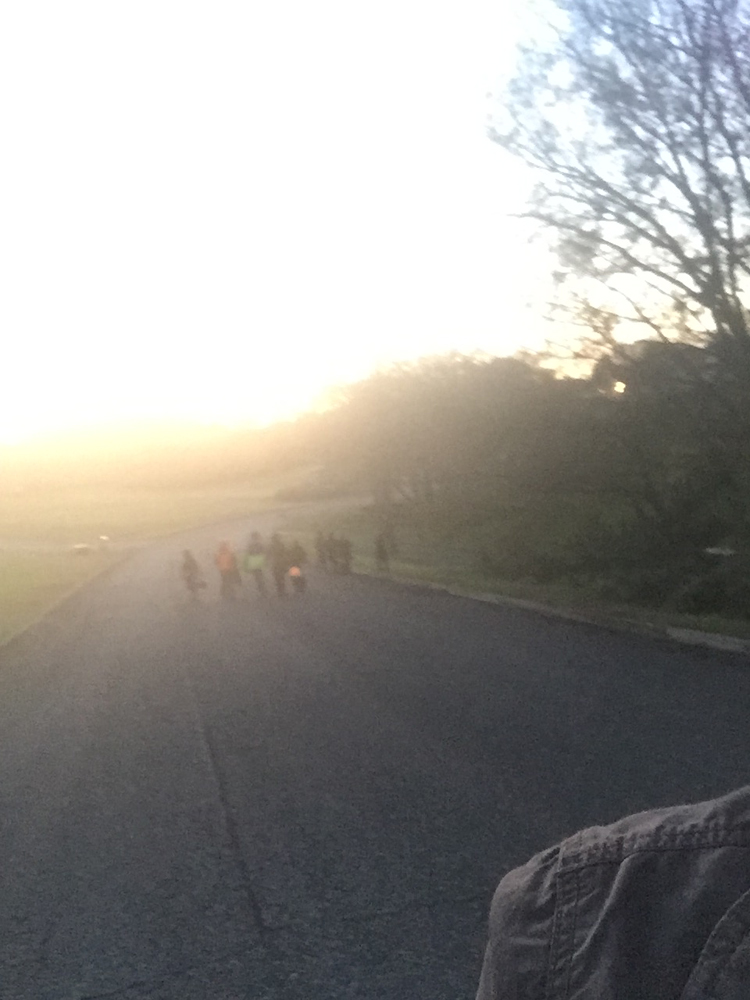 Only the front camera works (i.e., the selfie camera), and it’s actually terrible. 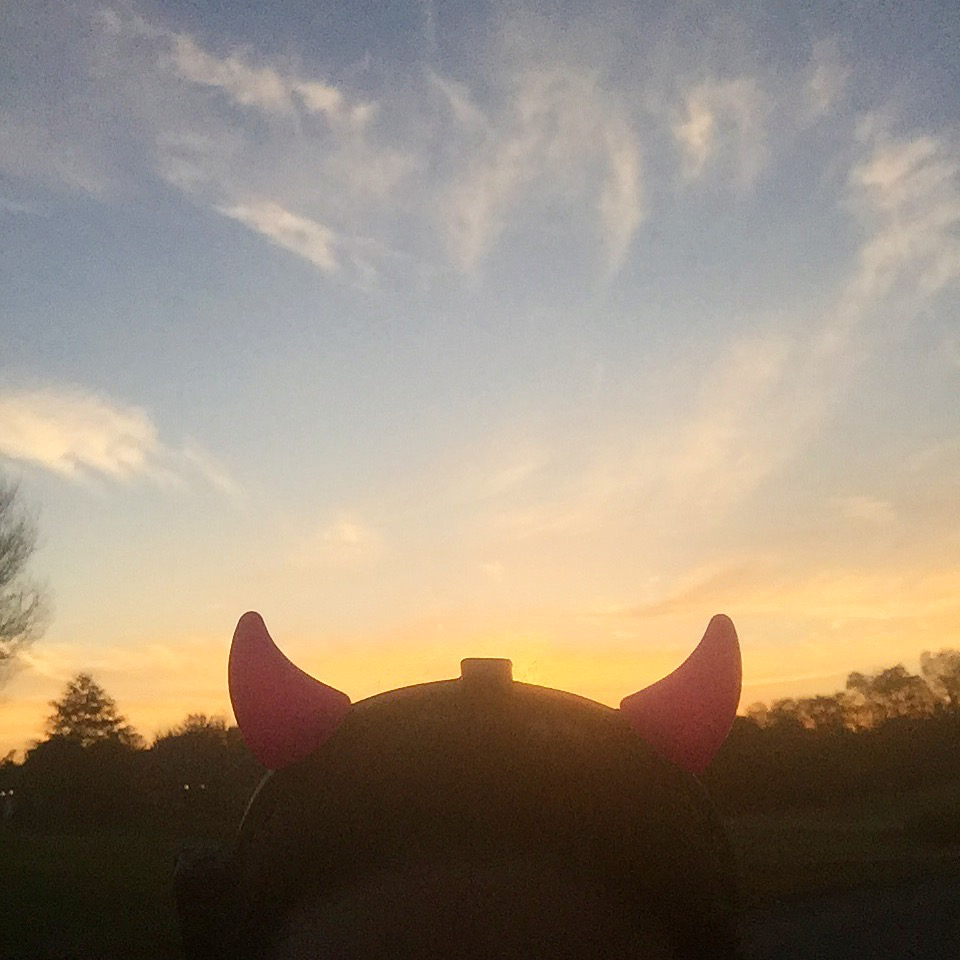 Before Halloween got away from us, we took a few minutes to celebrate Salem, our wonderfully fat black Halloween cat. As I’ve mentioned before, we have no idea when his actual birthday is, unlike Major, whose birthday is December 9. So, we selected October 31 for our favorite feline and celebrated what might be his 10th year on Earth (we aren’t sure about that either) by giving him a can of tuna. 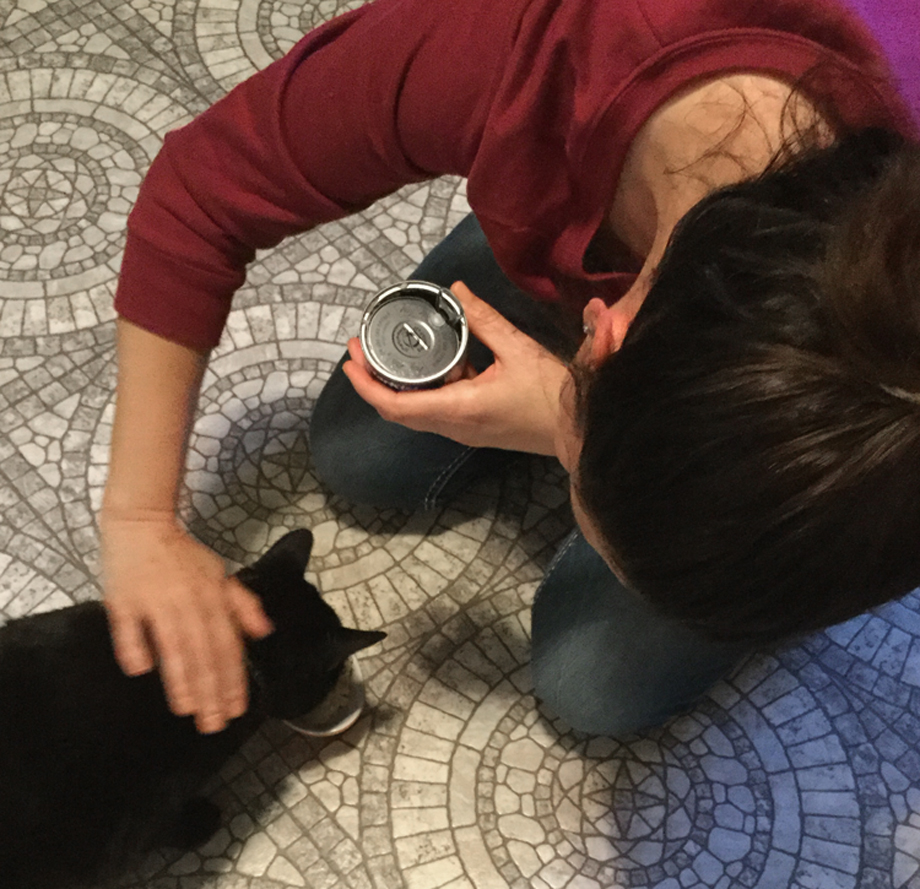 Finally, since today is November 1, I am making a second attempt at finishing my third novel during National Novel Writing Month. I’ve participated three times before and was successful in both 2013 and 2015. Last year was a wash, but here’s to trying again! (Maybe I only write novels on odd years?) I fully admit to starting the month ahead of schedule because I still have 3,000 (or so) words from last year that I’m recycling. There’s only one story to tell right now, so I’m not starting a new one.

One Reply to “Medal No. 17, Stranger Things 2, Halloween, NaNoWriMo”