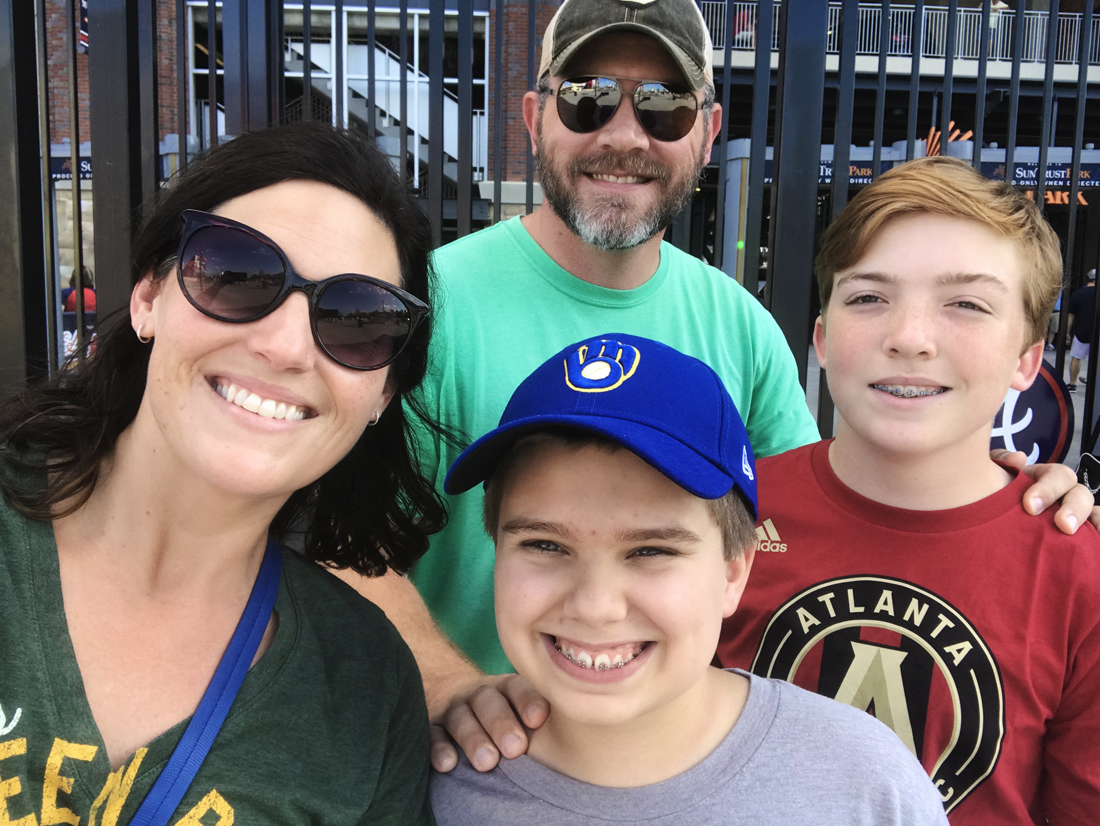 We’d gone out to dinner one night this summer to one of those restaurants with TVs scattered throughout the room. Baseball, soccer, and other summertime games blared over our conversation. At one point Jackson says, “I’d love to go to a Brewers game,” and I casually, almost thoughtlessly, replied, “Well, see if they’re playing the Braves anytime soon and we’ll go.”

Don’t you know he checked the schedule as soon as we got home, and sure enough, the Brewers were going to play Atlanta in August.

Please know that Jackson is the only one in the family who cares two beans about baseball.

But I’d said the words and I wasn’t going to take them back.

I bought tickets for our family of four, as well as Corey, Gwen, and Alex, so we could attend the game together. This was an important decision, not only for obvious friendship reasons, but because Gwen is a baseball fan and Jackson was going to need a buddy for the game while the rest of us occupied ourselves during the 18 million hours it was going to take those guys to play nine innings.

To say I was grateful for Gwen doesn’t even scratch the surface. We were excited as a group whenever the Brewers scored, but hells bells that was a long game and Jackson needed another baseball fan there who could keep up.

My favorite photo from the night:

Neither Chuck, Jeremy, nor I own any baseball paraphernalia whatsoever, so we weren’t able to support Jackson with Brewers gear, but I made sure to wear a Packers shirt, a smart choice on account of all the “Go Pack!” camaraderie I experienced walking around Suntrust Park.

Jeremy was pleased to support Atlanta United FC (thanks, Corey!).

Despite the game lasting an entire day of my life, I think we all had a good time. We bought cheap seats, which meant the sun was in our faces for the first hour or so, but once it tucked behind the ball park the temperatures were tolerable. I was grateful it didn’t rain.

To our complete and utter delight, the Brewers pulled out a win and Jackson cried with joy. Every second of that experience was worth it.

I’m not sure if we’ll ever make it to another MLB game unless we get air conditioned seats with a wait staff, but I’m thankful this one worked out schedule-wise AND score-wise. Happy Jack was SO HAPPY.

2 Replies to “Brewers vs. Braves: A Victory”