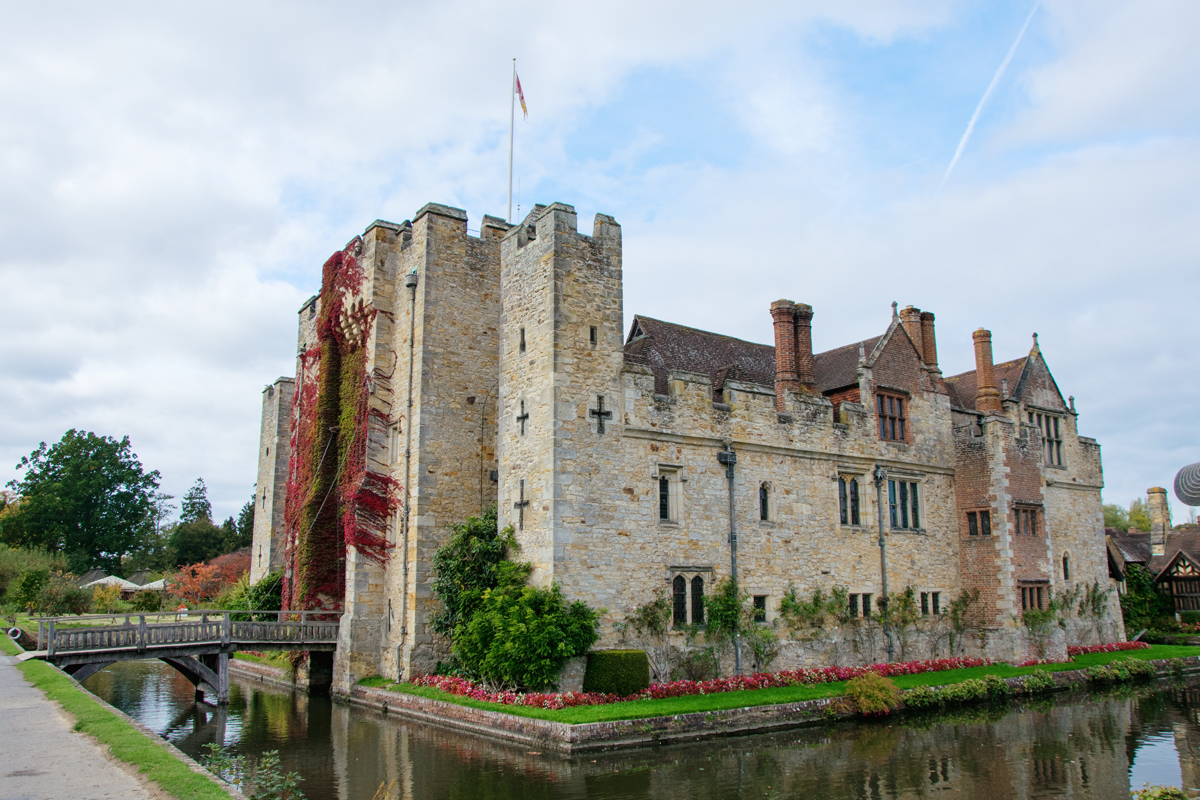 We visited more than just Hever Castle on Day 3, but my affection for Queen Anne Boleyn warrants its own post on account of the number of photos I took at her childhood home.

My interest in Anne Boleyn, Henry VIII’s second wife, is primarily rooted in her impact on the English Reformation as a religious reformer and her insistence to qualify their daughter Elizabeth as an heir to the throne. (Spoiler: Elizabeth I made it to the throne.)

Hever Castle was Anne’s childhood home, so it was a non-negotiable visit. Though Chuck had no prior knowledge about this place and has limited-to-no interest in the British Monarchy, he enjoyed touring Hever and said it was one of his favorite things we did while in the UK. 🙂

The property as a whole is stunning, and I remain grateful we visited on a bright, clear day. Upon crossing the drawbridge (THE DRAWBRIDGE!!!) we entered a courtyard that showcased the manor’s architecture.

Each room offers a delightful amount of access, unlike other castles that prohibit photography and keep a rope draped at the doorway. Some pieces of the home are replicas since the castle went into disrepair until a wealthy American, William Waldorf Astor, purchased the property in the early 20th Century to restore and preserve it.

I read as many placards as I could and studied the artifacts with great care. I’ve wanted to visit Hever Castle for more than a decade, and there I stood where the Boleyn family used to live. (Not that I have an affection for the entire family, mind you.)

Of course, Anne was wrongfully executed on the accusation of witchcraft and myriad other silly things. She was unable to produce a male heir (because women were totally in charge of that, you know) and she suffered a series of terrible miscarriages (again, the complete fault of the woman on account of her ). the importance of modern medicine!

Whatever really happened back then, Anne Boleyn remains an important piece of the Protestant Reformation, as well as a crucial role in the validity and success of Elizabeth I.

A few rooms of the manor reflected early 20th Century decor, as this was a private home for the Astor family.

Interestingly, Winston Churchill was acquainted with the Astor family and often visited Hever to visit and paint.

The grounds were beautifully manicured and beginning to burst with autumn color. Again, I was so thankful for the clear weather.

One of my favorite memories will always be feeding the ducks at Hever Castle. It was like that moment was crafted specifically for me.

I said, Hever Castle wasn’t our only stop on Day 3, but it was an important one for me.

Up next: Mermaid Street in Rye, the White Cliffs of Dover, and dinner in Canterbury.

One Reply to “The UK Trip: Day 3 at Hever Castle”