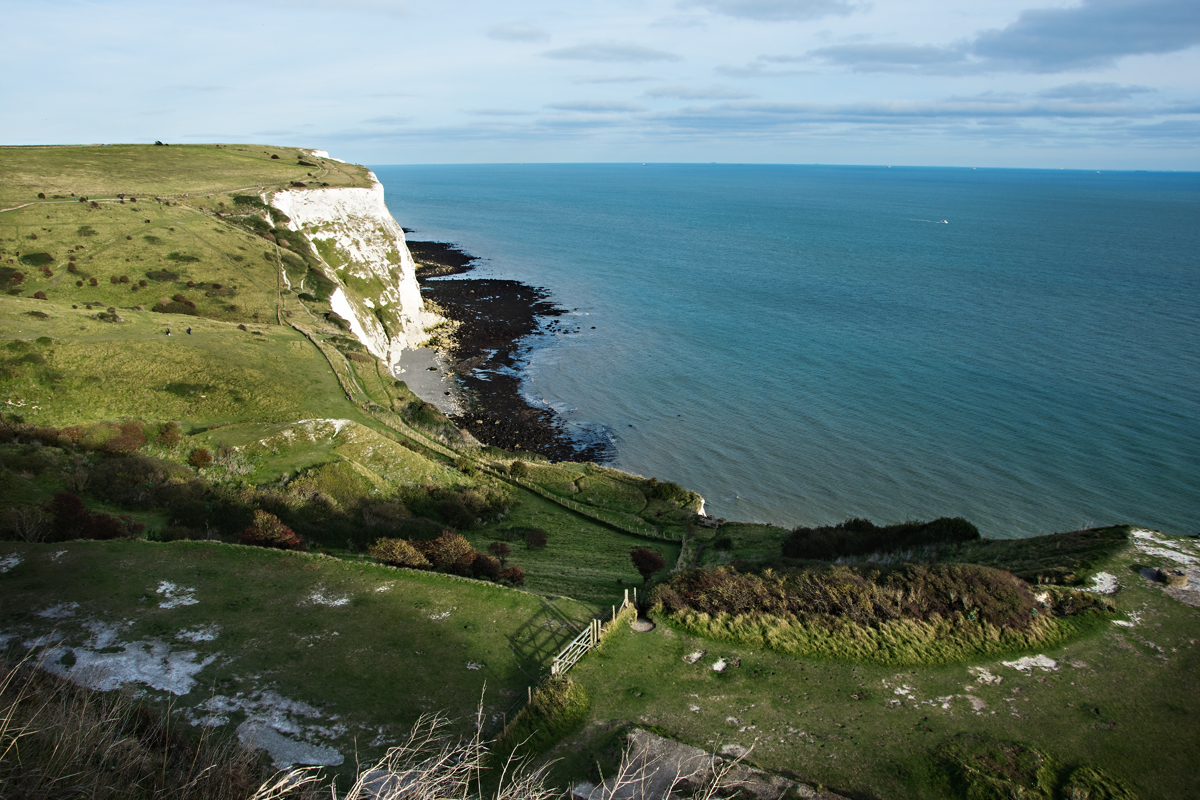 Every day we spent in England was meticulously mapped out to make the most of our limited time. Scotland was less so, and we would eventually enjoy a more laid back attempt at exploration later in the week. But for now, we had a schedule to keep and a list of things I wanted to see and do. Chuck was indifferent to most of the things on my list, so he was tasked to drive us wherever the GPS told him to go.

As noted in the previous post, Hever Castle was a must-see, so we visited it first thing Monday morning. Afterward, we drove to Rye to visit one specific street.

Yes, you read that correctly: to see a street.

Mermaid Street in Rye is consistently regarded as one of the most charming, quintessential English streets in the country. I’ve seen it in countless photos of the cobblestone road throughout the years, most notably in the spring when all the flower boxes are in bright bloom.

Though not as colorful or green as it might be in spring, Mermaid Street was well worth the extra drive. Again, Chuck was so amiable to whatever random thing I wanted to see or do. Bless him.

At the top of the hill, accessible by Mermaid Street, is the former home of author Henry James, where he lived and wrote at the turn of the 20th Century.

The walk down was as lovely as the walk up, as it afforded a beautiful view of the town.

After our stroll, we popped back in the car and drove to Dover specifically to visit the White Cliffs. Had we more time, I would’ve wanted to visit Dover Castle. Alas, I resolved to view it from the cliffs instead and enjoy the view from there.

We hiked along the cliffside, huffing and puffing, not knowing the worst hike of all hikes would occur the next day in Dorset.

I’m not sure one can appreciate the sheer size of the cliffs via photos unless you pinpoint a human and do some sort of comparison. If you can spot him, there is a man walking on the path in the top lefthand corner of the photo. He’s wearing blue jeans and there’s a huge tuft of dark shrubbery to the right of him.

The last stop of the day was Canterbury, and for a short while, I harbored the tiniest disappointment that arriving near the close of business hours would mean not going inside the Canterbury Cathedral. In hindsight, it was completely fine because my original thought was to do the reverse – Canterbury, Dover, Rye, Hever – and that would’ve meant potentially missing out on that delightful morning at Anne Boleyn’s childhood home. So, no biggie.

If you are unfamiliar with Canterbury Cathedral, its role in establishing Christianity in England, and the martyrdom of Thomas Becket, then you must read about it, for it is certainly hallowed ground.

We toured as much of the Cathedral as we could, which meant exploring the Cloisters and accessible outside walls.

We went on to explore Canterbury at dusk in order to enjoy the town as much as possible. Dinner ended up being at a pub called Thomas Becket and it was honestly one of our best meals throughout the entire trip.

Chuck ordered a steak and ale pie, and I enjoyed a sweet potato, onion, and goat cheese pie. (We have become big fans of savory pies thanks to the Great British Baking Show.)

The dark drive back to Kingston left us weary, but waiting for us were two tiny cakes – a Victoria Sandwich and a carrot cake. Thanks again, Great British Baking Show, for making our jeans tighter.

Speaking of food, I enjoyed eating beans at breakfast in England. I didn’t put them on toast but simply ate them alongside scrambled eggs, pastry, and mushrooms with thyme. I don’t know why England gets a bad rap about its food. I enjoyed everything I tried.

Coming up next: Windsor and Dorset