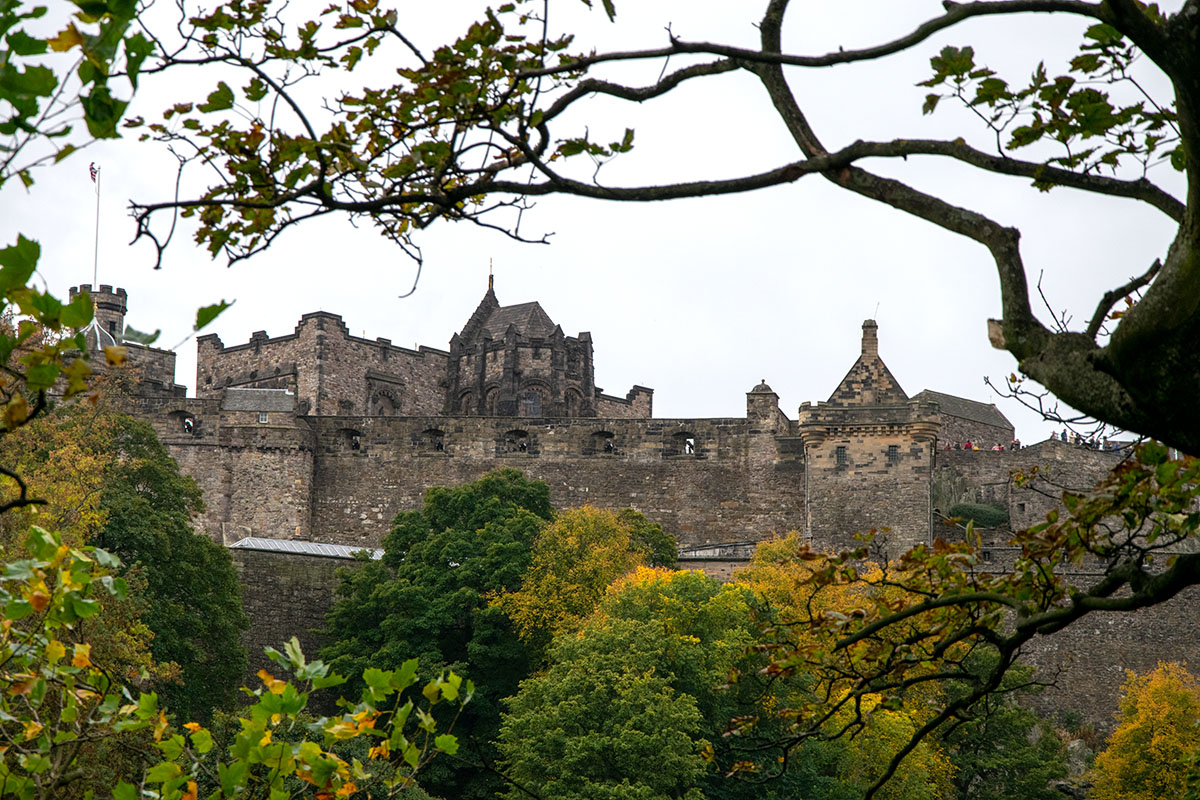 We arrived in Thursday evening just as it was getting dark. We were fortunate to find our Airbnb apartment and unload our things before it got too late, but instead of exploring the rainy city right away, we grabbed an Uber to the closest theater to watch “A Star is Born”.

The location of the apartment was perfectly situated across the street from a Starbucks and a grocery store, so on Friday morning, while I watched coverage of Princess Eugenie’s wedding, Chuck made a coffee and pastry run.

View from the bedroom window:

It was inevitable that our good luck with clear weather would end. The next two days in Scotland brought a constant mist and occasional shower, but we were prepared and had appropriate gear.

My expectations of Edinburgh were few, but even then I wasn’t prepared for so little color and flat building faces. Perhaps I’d just been spoiled with blooming flower boxes and bright blue skies in England. Maybe it was the rain that cast a gray shadow on the southern city. Whatever the reason, any bit of color caught my eye, like this purple door:

Our main goal for Edinburgh was the castle – naturally – so that’s the direction we headed on foot.

The wind was something fierce that day, so when we finally made it to the Royal Mile, we braced ourselves and held on for dear life.

Expansive views from atop the castle hill:

Unlike many of the places we’d visited already, the tourists were swarming at Edinburgh Castle. In some places, it was a tight squeeze. I caught a few photos without people obstructing the view.

After touring the grounds, it was easy to see why this castle was one of the inspirations for Hogwarts.

St. Margaret’s Chapel is the oldest surviving building in Edinburgh:

My favorite spot on the grounds:

My monarchy-loving self also thoroughly enjoyed all of the Mary, Queen of Scots and King James VI exhibits. (Photography was limited.)

The war memorial on the castle grounds was also worth a stop. Here, a tribute to the Cameronians from the Highlands:

On account of the rain, I didn’t have my camera out as often as I normally would, but I managed to snap a few good photos with my cell phone, including a selfie:

One thing I didn’t realize about Edinburgh is that it’s layered – there are literally layers of streets, passageways, and hidden tunnels throughout the city. We’d approach a bridge and I’d expect an alleyway of some sort. But no, it was an entire with traffic and people three stories below.

A post about Edinburgh wouldn’t be complete without a photo of The Elephant House, the little cafe where JK Rowling spent her earlier years writing the Harry Potter series.

On our way back to the apartment we stopped at Gordon Nicolson Kiltmakers to buy a tie for Chuck made with his family’s tartan, the Camerons. It was made to order and shipped to us back home.

He opted for the hunting tartan below instead the standard clan tartan, which is red and green and looked too Christmasy.

Dinner that night was take-away from a little Thai place across the street from the apartment. Having been cold and wet from the rain all day, it was nice to cozy up on the couch and chill.

Up next: Cairngorms National Park and exploring the old Cameron family stomping grounds