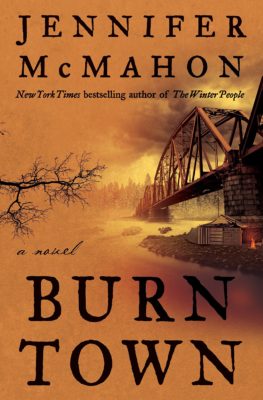 Burntown has been on my TBR (To Be Read) list since I heard about it. Already a big fan of The Winter People and The Night Sister, I knew Burntown would be worth the it. I wasn’t wrong.

There is something that happens in a Jennifer McMahon book that I’ve yet to see replicated as well in others. She manages to marry mystery/thriller with the slightest paranormal in a way that seems totally natural. I’m not a fan of paranormal as a genre, but when it comes to McMahon, I’m all in.

Burntown begins with a scene from the past – a young boy watches while his mother is murdered.

Then we jump forward. All grown up, Miles Sandeski has a family of his own. He makes things, builds things with his hands, including a machine based on Edison’s design to reach beyond the veil between life and death. Somehow, the machine works and he can hear his mother’s voice, which tells him her murderer – a man named Snake Eyes – is not gone. In fact, he’s watching Miles, waiting for another opportunity. The family is not safe, and then a flood sweeps in, washing away the Sandeski’s home. Miles and son Errol are gone. Miles’s wife survives for a short time, but then, it’s only their daughter, Eva.

In an attempt to live some version of a cursed life in Burntown, the underbelly of Ashford, Vermont, Eva changes her name to Necco and lives in a car with her boyfriend. The murderer is now after her. The cycle continues.

Though the main character is Necco, we also hear from two other women – Theo and Pru, who each have their own journey that intertwines with Necco’s. When these three finally team up, the pacing of the story quickens towards a resolution.

The Winter People continues to be my favorite of McMahon’s so far, but Burntown is special in a way that leaves me – if I’m being honest – a little jealous. McMahon is darn good. She knows how to craft a creepy story that’s totally bizarre and equally believable. Once the ball was rolling, I was locked in. We knew Snake Eyes was going to resurface. We knew the Edison machine was going to be important. We knew that Necco was going to succeed. BUT HOW? How does it all come together?

You have to read Burntown to find out.