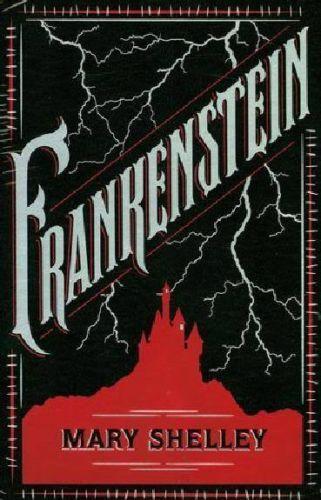 One of the perks of developing my own English class for our co-op is selecting works I love and think are important for young people to read. Out of 15 students, more than half dreaded reading Frankenstein. A few were neutral, which left a few who were actually eager to dive in and see what this novel was all about. I’m happy to report that I welcomed a group of converts into the Pro-Frankenstein Club. (Not everyone loved it, but many did!)

For the sole purpose of encouraging non-students to read Frankenstein, I decided to offer a short book review here.

Often labeled the first work of Science Fiction, Frankenstein is a frame story that begins with letters from a ship captain, Robert Walton, to his sister, Margaret. Walton is terrifically lonely on his expedition to the Arctic and has no one (his equal) to share in the adventure. Just when he thinks he’ll be alone forever, a downtrodden man near death is found floating on an iceberg. Pulled aboard, Walton learns the man’s name: Victor Frankenstein. Once he’s strong enough, Victor tells Walton his tale.

Enter Frame Story Level I: Victor grew up in a perfect family, loving and generous. He had an interest in science, and though it wasn’t necessarily shepherded well by his parents, it wasn’t squashed either. During his teen years, he explored different areas of science, incorporated philosophy, and began to question what he may be capable of. One night, when he was 15 years old, he watched a storm brewing and saw lightning strike a tree and enflame it. This gave him a curious idea involving electricity.

Years later, his curious idea morphed into the desire to create a new species. Thus became the monster, but upon seeing what he’d created, Victor abandoned the creature and ran away in fear. Chaos ensues.

It’s important to know that readers experience a few more layers of storytelling, hearing more than just Victor’s side. Though the language isn’t modern, and it can be exhaustive at times, the themes and ideas explored in Frankenstein are well-worth the wrestling. Whether or not Mary Shelley knew of her own genius, I’m not sure, but she presents several important questions to readers that still apply today:
1) When does life begin?
) What is our responsibility toward life?
3) What are the dangers of blind ambition?
4) How far should we go scientifically when lives are at stake?

If reading Frankenstein is too daunting, I highly encourage you to listen to Audible’s version narrated by Dan Stevens (Matthew Crawley from Downton Abbey, the Beast from Beauty and Beast). You will not be disappointed.