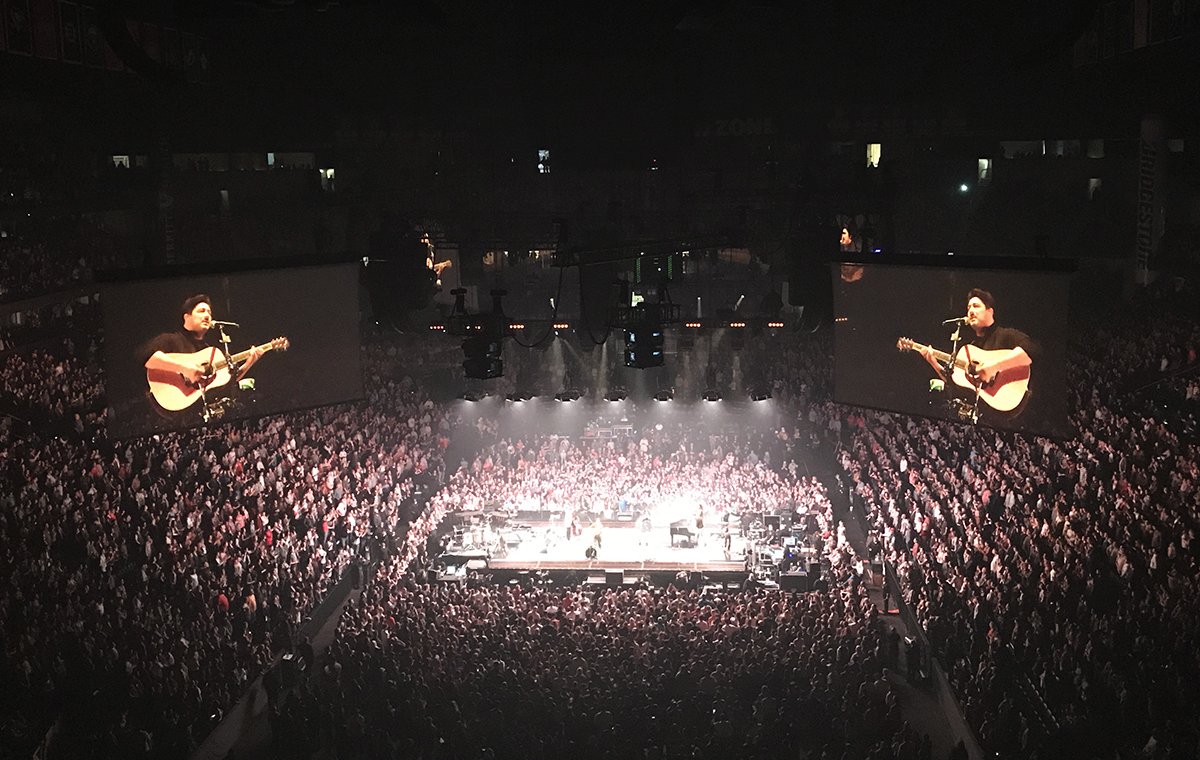 When I became a Mumford & Sons fan, Chuck and I were in the midst of trying to move back to Tennessee after living in Texas for two years. He was already back home, but the boys and I were stuck in Amarillo waiting for our house to sell. I don’t remember the exact phone call, but at some point in the fall of 2010, Chuck told me about a song he’d heard on the radio, and he thought I’d like it. As soon as I listened to “Little Lion Man,” I was hooked.

I wore out Sigh No More immediately, and, after moving back to East Tennessee in March 2011, Chuck and I drove to Asheville in June 2011 to see the band in concert. We were blown away by their energy on stage. They sounded exactly as they did on the album, which is always a sure sign of a good artist.

When Babel was released in 2012, it was a fast favorite. The band went on their Gentlemen of the Road tour in 2013, and I drove down to Atlanta with Karin to see them a second time. The band went in a new direction with Wilder Mind, which I didn’t mind, and when Delta came out last year, they did it again with another new sound. No matter what they do, I love it. (I feel the same way about The Killers, the other band I’ll always pay to see.)

We headed to Nashville Friday afternoon in time to grab dinner and drinks before sunset.

It was windy on that rooftop bar, so when I tried to take our photo, a gust of wind rolled through at the exact moment the camera snapped, whisking away the menu. I couldn’t have staged a better photo if I tried. This image captures our marriage perfectly – Chuck is calm and collected. I am freaking out. It’s all about balance.

This was the view across from our hotel, which was nicely situated next to Bridgestone Arena. I stared at the museum for several minutes before realizing the reflection showed piano keys in the design.

But onto the most important news: The concert. It was a low-frills show, a centered stage with modest lights. That didn’t bother me because I don’t go to see the band. I mainly want to hear them. Minus one song (which isn’t really a song but instead a recitation of Paradise Lost), I loved everything I heard. I sang and jumped and clapped and smiled. It was marvelous.

The only song I captured fully on my cell phone was their cover of “Hurt” – which I anticipated them playing since I’ve been following their set lists the entire tour. Originally a Nine Inch Nails song, which is great on its own, Johnny Cash also covered the song on American IV: The Man Comes Around.

To hear Marcus sing it gives me chills.

T’was a perfect night with my favorite guy.