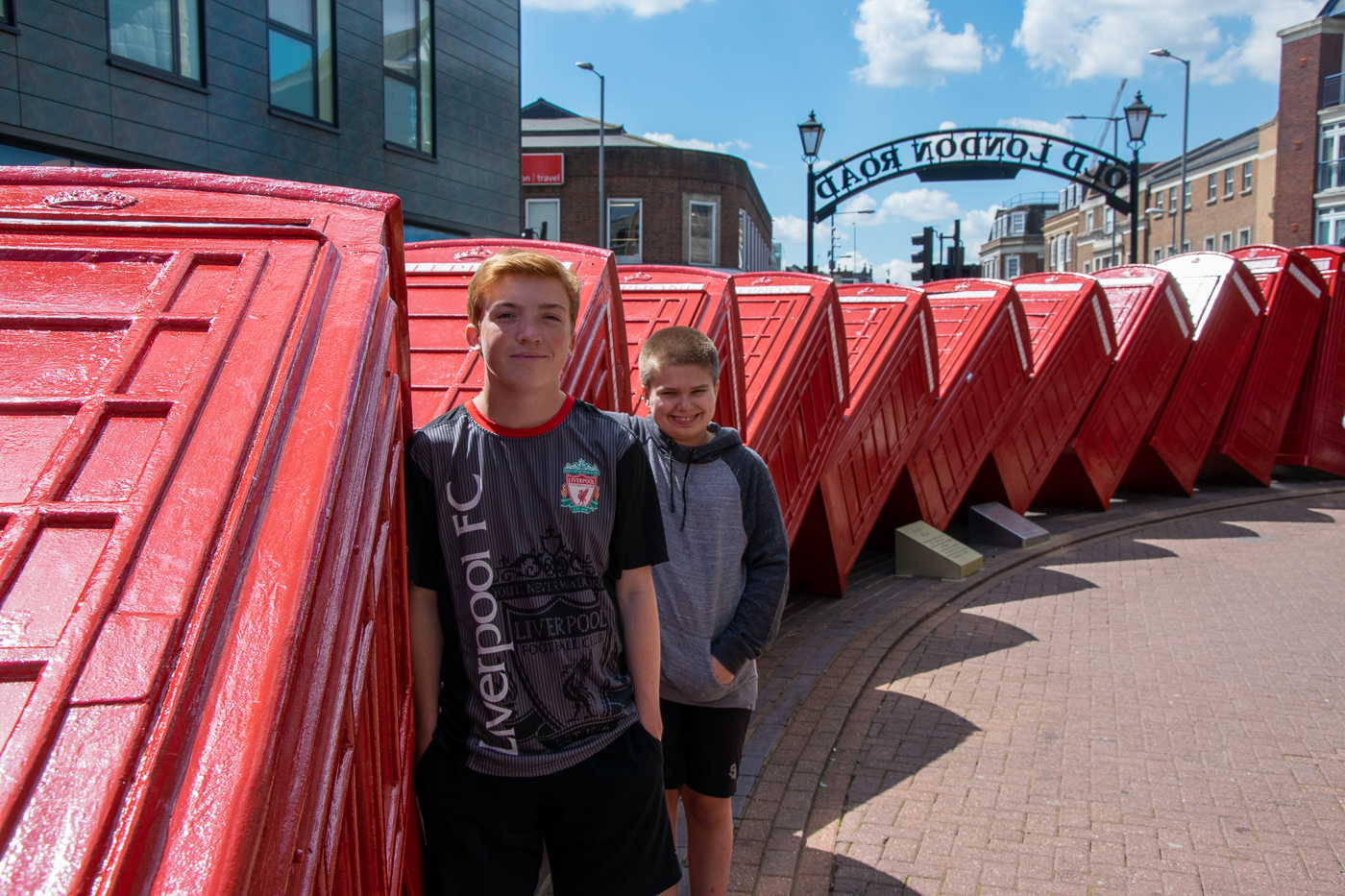 Last year, when Chuck and I flew to the UK, we opted for an overnight flight so we wouldn’t lose a day of sight-seeing. A quick nap upon arrival gave us enough energy to power through the jet lag.

This time, however, remembering how rough it was on the boys when we flew to Iceland, we decided to surrender a day of sight-seeing for a day of travel. We flew out of Chicago at 9 a.m. and landed in London close to 11 p.m. By the time we were settled in Kingston-Upon-Thames and had eaten our room-service pizza, it was time for bed. Despite the incredibly long day, I think it was easier for the boys to acclimate.

I love Kingston-Upon-Thames and couldn’t wait to return, particularly since we had plans to visit Hampton Court. It’s southwest of London, perfectly situated on the river as the name suggests, and entirely walkable.

Before heading to Hampton Court, we stopped by All Saints Church, where the earliest kings of England were crowned. They still have the coronation stone inside.

The 30-minute walk to Hampton Court took us through the town and over the Thames, and it made me love the city all over again.

I’m tempted to draft a long history of Hampton Court’s significance, but I won’t torture those of you only came here for the photos. In short, Hampton Court was Henry VIII’s favorite place to be. It was transformed from a stately home to a true palace under the eye of Cardinal Thomas Wolsey, who failed to secure Henry’s first divorce from Catherine of Aragon and therefore secured his fateful death.

It was also where the Protestant King James I (of England) and VI (of Scotland), who reigned after Elizabeth I died, held a conference to discuss the translation of the Holy Bible into English for the faithful to read. (Spoiler alert – he had the first English translation named after him.)

Hampton Court is essentially two palaces in one – the rose-brick Tudor palace from the 1500s and the baroque palace of William III from the 1700s.

At various points throughout our tour, I kept thinking certain places looked familiar as if I’d seen them before. Sure enough, a quick Google search reminded me that certain scenes of The Favourite were filmed here, as Queen Anne was the last Stuart monarch and spent a lot of time at Hampton Court.

I couldn’t wait to get my eyes on The Great Hall, which is practically a shrine to Henry VIII. My photos of the stained glass don’t do them justice.

If you’re able to zoom in on the stained glass, you’ll see all the wives’ names and their subsequent mottos.

Aw, poor Jane. She is buried with King Henry at St. George’s Chapel at Windsor. Henry considered her his true wife. She was wife No. 3 and the only one who bore him a living son, Edward VI.

My favorite, however, is Anne Boleyn. Her motto was “The Most Happy.” My sweet husband was such a champ to endure my Queen Anne fandom last October when we visited Hever Castle, her childhood home. It ended up being one of our favorite things on that trip.

It was Anne who gave us Elizabeth I.

One area where photos weren’t allowed was the Chapel Royal. (Below is a photo from the official website.) It was in this chapel where Henry’s son and future king, Edward, was baptized. It’s important to note that it was Henry who commissioned the vaulted ceilings in the 1530s and the blue starry sky was painted by Sir James Thornhill for Queen Anne Boleyn. She didn’t enjoy the ceiling for very long since she was executed in 1536.

Here’s a better view of the starry ceiling:

That’s Chuck walking out of the right side of Hampton Court into the gardens (note the baroque style from William III’s contributions).

The grounds were phenomenal and largely attributed to King William III and Queen Mary II.

The great surprise of Hampton Court came to Jackson, who loves ALL THINGS related to Guinness World Records. At the far end of the gardens is the largest grapevine in the world and there’s even a plaque there to prove it.

He wept a little, unprepared to see a Guinness World Record in person with his own eyes. He wanted to take his own photo of the certification.

We walked back to the center of Kingston to catch a quick look at David Mach’s 1989 sculpture “Out of Order” and grab some Cornish pasties. Thus began the carb-loading portion of our vacation.

With plenty of time left in the day, we took a quick drive to the seaside to visit Brighton, a Myrtle-Beach sort of vacation spot. It gave us an opportunity to show the boys the English Channel.

It was on this pier that we got ice cream cones. However, only three of us finished our cones since a seagull swept down and stole mine right out of my hand. I thought they were only interested in french fries. Alas, no! Beware the seagulls!

If you’ve been to my home, specifically my home office, you know I love bunting. England has bunting in spades and Brighton is no exception. Everything looks happier with bunting! Hang ALL THE BUNTING!

After our walking tour of Brighton (you can see more on Instgram, including our dinner at a local pub saved on the UK Instastories), we drove to a hotel connected to Gatwick Airport. The next morning, we were flying to Milan.