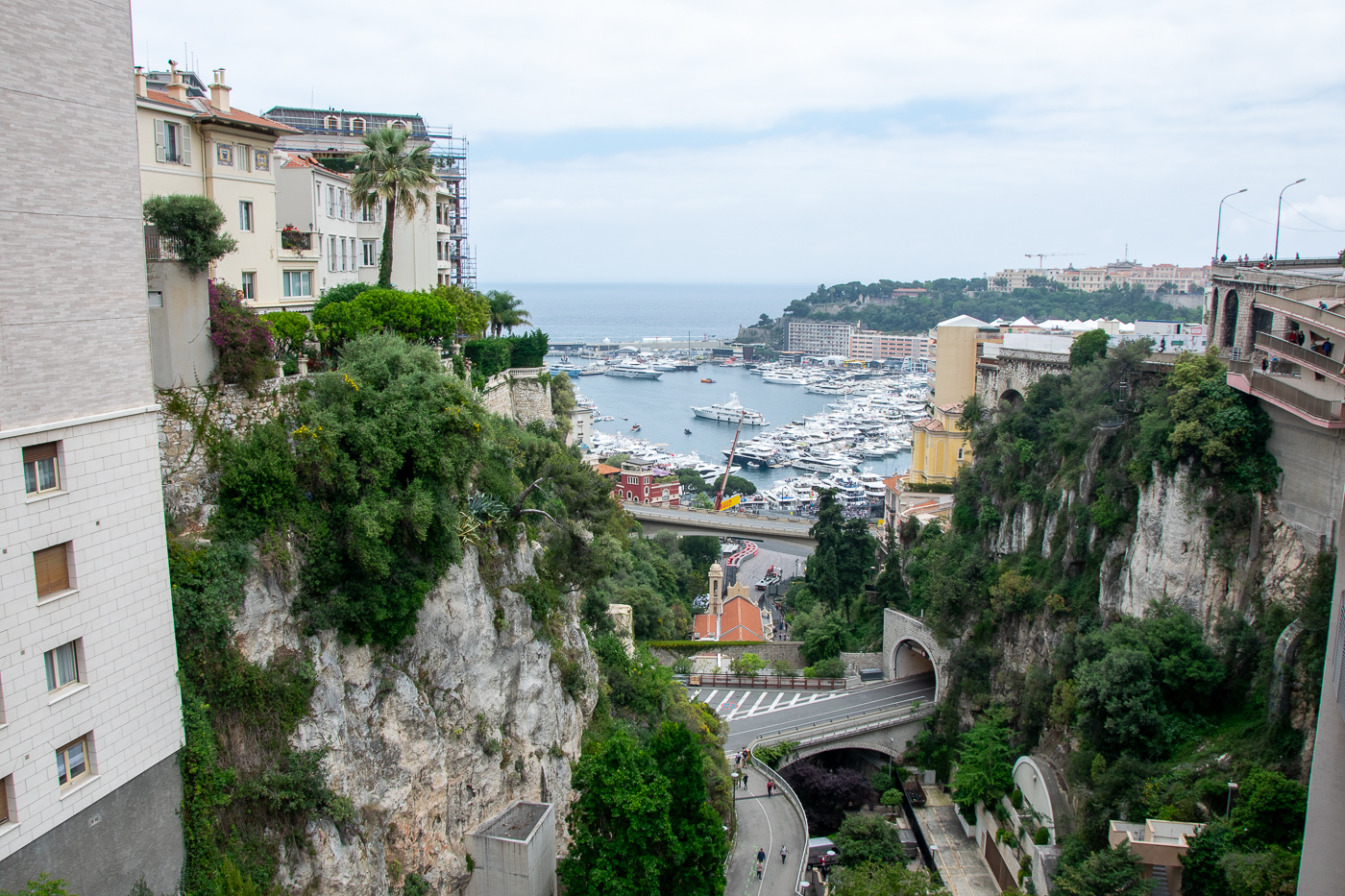 If you’d have told me as recently as January that I would want to go to Monaco for a Formula 1 race, I wouldn’t have believed you. Thanks for everything, Drive to Survive.

When we learned that the Monaco Grand Prix was slated for the exact dates we would be in the area, I immediately researched how to buy tickets. There was much to learn! Where do we sit? What if it rains? What can we afford? Do we know anyone with a yacht?

Spoiler: We did not know anyone with a yacht.

For our first Grand Prix experience, we opted to go to a practice day instead of the actual race. Part of it was a financial decision (adult tickets were $90 each, kids 15 and younger were free!), but part of it was because we would be in Italy come race day, and we didn’t want to undo plans and rearrange everything.

But first, breakfast. Chuck was our resident boulangerie shopper. He went to the bakery each morning to order quatre croissants.

The train ride to Monaco lasted all of 45 minutes and cost around €8 roundtrip per person. We had already fallen for Antibes, but we were about to crush hard on Monaco.

Our initial and lasting impression of Monaco is that it’s the most beautiful city/country in the world. It’s completely perfect, other than the fact that the majority of the world cannot afford to live there.

The streets are spotless. As in, no garbage remnants, no cigarette butts, no tiny pebbles along the curbs. Everything shines and sparkles.

I imagine we looked like lost children wandering the streets of Monte-Carlo, trying to figure out where we entered for Tribune T, taking in all the glorious sights of team gear and apparel for sale, wondering where all the alleyways and side streets led… Eventually, we found the Fan Zone, where Chuck and the boys raced for Aston Martin Red Bull.

The first practice was at 11 a.m., and we wanted to be seated and ready since our seats were across from the pit lane. That meant we could see everyone (drivers!) walking to their cars.

Serendipitously, our seats were directly in front of the only American-owned team, Haas. We were giddy!

The giant screen in front of the pit lane gave us a view of the entire practice, thankfully! When you’re in the stands, all you see is what’s directly in front of you, and since the cars move so quickly, you can’t blink!

People were camped out in balconies, tree lines, and slopes, wherever they could find a free spot to watch the practice.

I’m sure there are celebrities in there somewhere, unless they are all on yachts. It makes sense that the Cannes Film Festival and Monaco Grand Prix fall during the same few weeks.

After the first practice, we walked around more of Monte-Carlo. Since the city/country is less than one square mile, we can say we literally walked around an entire country in an afternoon.

I dare you to find one piece of litter in Monaco.

I’m going to need a wall of plants, please.

A walk around Monaco means you’re constantly walking up or down a hill. The country is on the side of a mountain, so everything layered and stacked.

On account of the Grand Prix, the casino was closed. It’s a shame since Chuck wanted to gamble a minute and I wanted to enjoy the view from Café de Paris. I guess we’ll just have to go back!

McLarens and Ferraris were everywhere.

There were also tons of landmarks and signage honoring Princess Grace.

Seriously, is this real?

One stressful thing happened while we were in Monaco: We couldn’t get cash out of an ATM, which made me think there was something wrong with our cards. It was also impossible to use the data on my cell phone, so calling our bank wasn’t working. (Monaco has its own WiFi, which visitors have to pay for. I didn’t know this!) Thank goodness we found a Starbucks. I used their WiFi to contact the bank, which assured me all was well on our end. It must have been that the ATM was out of money or there was something faulty with the machine. While I decompressed in Starbucks, worrying that we’d have to make whatever euros we had on hand last the day, Chuck found another ATM that worked. All was well.

We went back to our seats for the second practice at 3 p.m.

When the practice was over, we took one last stroll around Monaco, this time climbing the hill to the castle. The views were outstanding.

Monaco’s flower game was on point!

None of us were prepared to be blown away by Monaco, but we were all in love by the end of the day. Jeremy announced he’s moving to Monaco when he grows up, so I’ll be sure to let everyone know where he lands so you can visit him.

Back in Antibes, we grabbed pizza for dinner – ordering en français, s’il vous plaît – and went back to the apartment to put up our feet. We were sleeping in the next morning for sure.