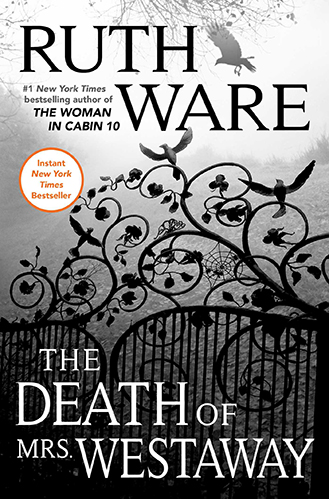 I didn’t immediately jump on the Ruth Ware bandwagon after reading In a Dark, Dark Wood back in 2016. I liked the book just fine, but I wasn’t feeling the immediate pull to read everything from the author.

Three years later, I decided to give it all a go, starting with Ware’s fifth novel, The Turn of the Key, which was published this summer. This one does a stellar job of using setting as a character since the story takes place in an old Victorian home that’s been internally updated to be a smart house. You get old haunting vibes with the knowledge that anyone could be watching you via cameras.

Rowan Caine answers an ad for a nanny at Heatherbrae House in the Scottish Highlands, but what she doesn’t realize is that she’s walking straight into a nightmare. A child is going to die (not a spoiler) and she’s going to prison for murder (also not a spoiler).

The story is told in epistolary form (via letters from Rowan to her lawyer), which can get tedious at times, but it’s still a clever way to tell a story when it’s almost entirely in flashbacks. The narrative is highly suspenseful throughout and even creepy at times. It’s definitely my favorite of Ruth Ware’s books.

I was so pleased with The Turn of the Key that I immediately went on to The Death of Mrs. Westaway, Ware’s fourth novel.

Harriet Westaway, “Hal”, lives modestly in Brighton as a tarot reader on a pier. One day she receives a letter informing her that she is the chosen recipient of a substantial inheritance by her grandmother in Cornwall. That would be great news if Hal’s grandparents hadn’t already died years ago.

However, since she’s desperate for money (to pay off loan sharks) and tired of living pound to pound, she decides to attend the funeral to see if she can get away with accepting the inheritance without anyone being wise to her scheme. Of course, it’s not going to be easy.

The Death of Mrs. Westaway is less suspenseful than The Turn of the Key, but it still kept my interest because I wanted to untangle the knot. Each member of the Westaway family had a secret to keep, and it was a fun ride with Hal to see where each puzzle piece fit.

This book was advertised as an “unputdownable thriller,” but I challenge the “thriller” part. I did get through it quickly because I wanted to know how Hal was related to everyone – or if she even was related to them at all.

Since I was on a roll with Ruth Ware books, I finally picked up her second one, The Woman in Cabin 10, which was published in 2016.

The story begins with a burglary. Lo Blacklock is a travel journalist (dream job!) and had the unfortunate experience of a traumatic break-in. To escape the fear she feels at home, Lo leaps at the chance to take part in a luxury press tour on a Scandanavian cruise. One night on the water, she sees what she believes is a woman being tossed overboard to her death. Lo cannot let this go, despite a full search aboard the ship and everyone reassuring her that she didn’t see anything.

A few things: The initial burglary put Lo in a state of constant anxiety, so her narration was irritating to the point that I didn’t want to hear any more in her voice by the middle of the book.

Secondly, the pacing seemed to drag. I understand the need to create claustrophobia on a small cruise liner, to agitate the reader so he/she *feels* the tension, but I became too frustrated with the slow pacing (combined with the tight living quarters and Lo’s anxiety) that I could not finish the book.

That’s right. I didn’t finish it.

Of course, I wanted to know how it ended, so I read a summary online and immediately felt relieved that I didn’t suffer the rest of the book for that storyline. The Woman in Cabin 10 has been my least favorite Ruth Ware book thus far. I don’t recommend it.

I’ll give The Lying Game a go soon. Then, I’ll be up to speed.

One Reply to “Book Review: Three novels by Ruth Ware”