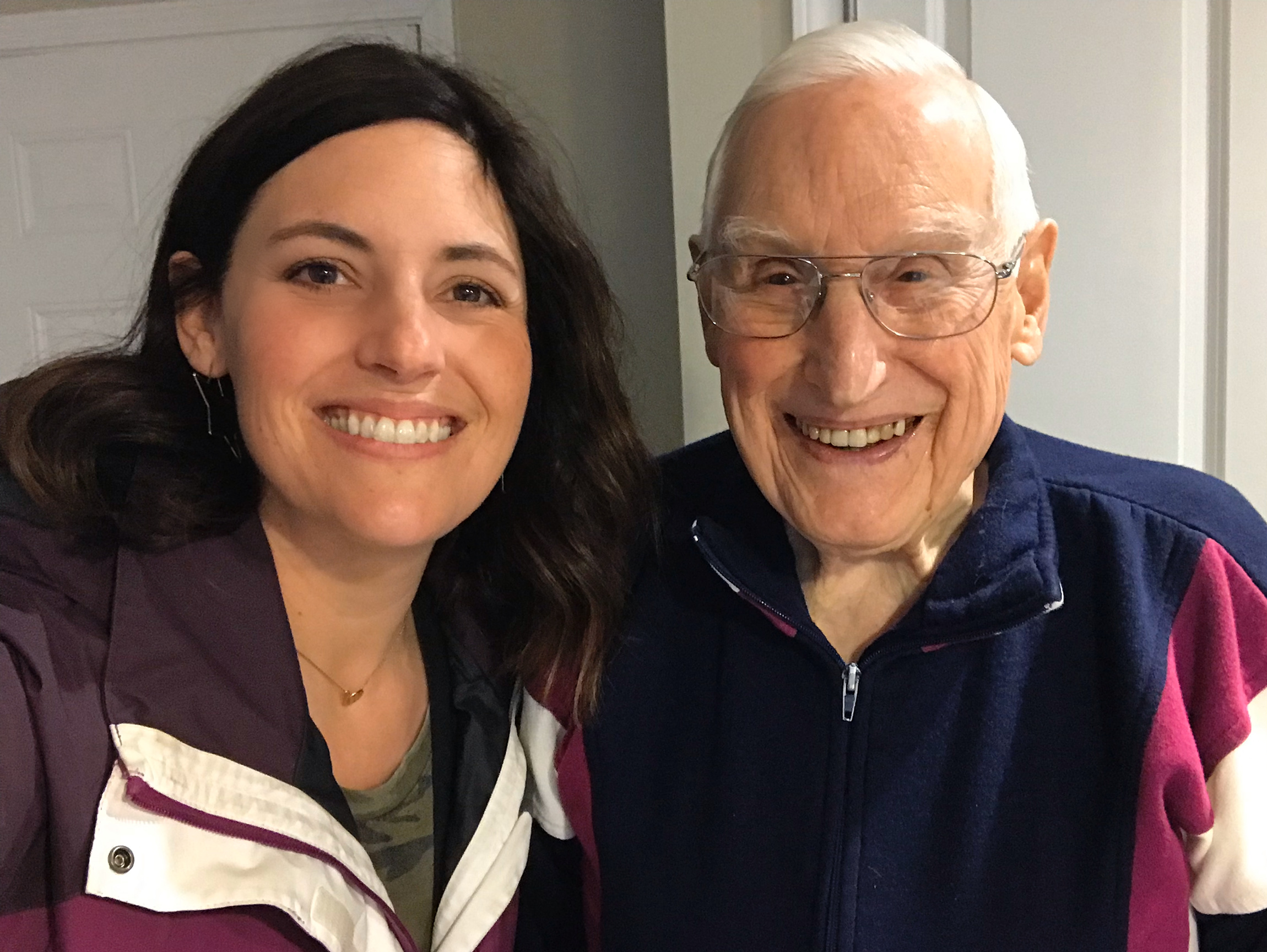 Here I go again asking that you keep my family in your thoughts: My grandpa died suddenly and swiftly on Sunday evening.

My first thought was this: In what cruel world does my mother’s husband and father die within three months of one another?

Grandpa Thomas, who would’ve turned 94 next week, moved to Knoxville from Bethesda, Maryland, in January of last year with a ton of energy and optimism. He thrived on his independence, and he took his time settling into the West Knoxville apartment I picked out for him. I helped him unpack his books, buy a new computer, and I changed his bedsheets every time I visited (because no one at his age should have to wrestle with a fitted sheet).

If you and I are friends on Instagram, then you might have seen my “Thursdays with Grandpa” Instastories I’d post from time to time. His apartment was minutes away from our co-op (an intentional move on my part), so I often went over there on Thursday afternoons to check on him, have lunch with him, listen to music with him, and so on.

He’d come over to Sunday dinner occasionally, particularly when other family members came in town. This is the last large-family photo we took together, when Bob and Carie came to visit last July:

All of this was pre-COVID, of course.

By the latter part of 2019, Grandpa was struggling to breathe comfortably, and by mid-November, he was put on oxygen full time. In fact, the last time he visited my house was for Thanksgiving when he wanted to do a trial run “traveling” with a portable oxygen tank. He stayed overnight in a hotel nearby, but all of it proved too difficult. Upon returning home the next day, he told me, “That’s the last time I’ll go to your house.”

The next few months were a blur. Dad had his stroke on Dec. 8, and then all the days ran together. Mom flew to California to be with him, and they didn’t return to Tennessee until January 31. We kept Grandpa in the loop with multiple phone calls and emails each week. He was desperate for new information he could pass along in mass emails to the Thomas side of the family. We were all confused about everything, not knowing what the future would hold.

Alas, what the future held was a pandemic.

By spring break, our remaining weeks in the academic year were moved online, and I became Grandpa’s personal grocery shopper and Dad’s driver post-radiation three days a week. March and April were some of the strangest months of my life. (I’m forever grateful Chuck was home to take care of things in my long, daily absences.)

At one point, perhaps in April, I’d finished putting away Grandpa’s groceries and sat down to talk to him while he ate lunch. He said something I’ll never forget: “This virus will be around for two years at least.”

“Oh yes. It will be around at least two years or until there’s a vaccine.”

I didn’t believe him, which is foolish on my part because when you’ve lived on the earth 93 years, you know much more than someone who’s only been around for less than half that time.

In July, Uncle Russ flew in from California to stay with Grandpa and assess what level of care he needed. I was grateful. I felt pulled between Grandpa’s apartment and my parents’ house, not to mention whatever was going on at my house. Knowing that Grandpa had one of his kids living with him full time meant we could funnel our focus to taking care of Dad.

After Dad died on Sept. 10, we all entered a fog. Time passed. School and work continued. So did the pandemic. We all functioned.

Being cautious about COVID, we stopped visiting Grandpa in person. We kept to emails and phone calls. There had been some discussion about what to do when his apartment lease ends in the spring, but now there are other matters to sort out.

Grandpa went into cardiac arrest Sunday evening, November 22, and passed quickly. I am deeply sad that he’s gone – that goes without saying. But I am also sad over missed opportunities and the fact that his entire last year of life was marred by a pandemic. He hadn’t left his apartment, save for a few doctors’ appointments, in months.

The heaviness of this year cannot be understated. We have been put through the wringer and WE ARE NOW WRUNG OUT. FULL STOP.

With Thanksgiving and Christmas in our midst, I struggle to find any sort of cheerful spirit. I’ve been here before though, so I know how to navigate the holiday blues. To wake up another morning means I am still alive and there is plenty to live for, but the pain of what we’ve walked through is fresh and raw.

Grandpa, you would’ve been the first one to read this blog post. You were a faithful subscriber! While your brief stay in Knoxville wasn’t what any of us anticipated it would be, I am extra grateful for all of those Thursdays with you. ❤️