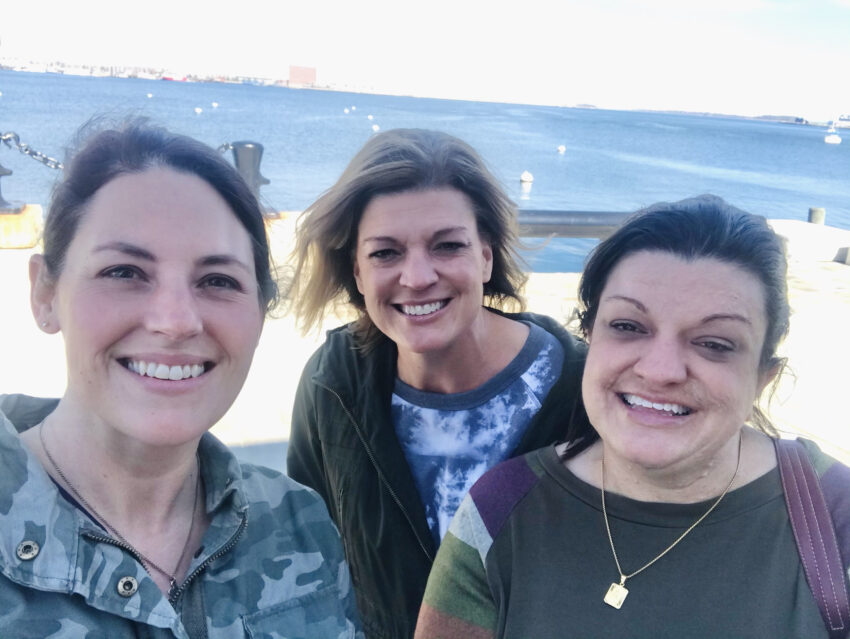 On my third and final full day in Boston, we met Amy in Beacon Hill after her morning appointment. Pre-Covid, someone would’ve gone to all of her appointments with her. Despite being vaccinated, neither I nor Shannon were able to go – yet another frustrating effect of the pandemic.

Beacon Hill is a magnificent section of North Boston where some of the wealthiest people live on some of the oldest cobblestone streets in the country. The brick and iron work of the buildings are a perfect contrast to the overflowing flower boxes and blooming trees that line the streets.

There wasn’t an ugly street or building to be found, honestly. There were so many turns to make, so many possibilities, that it took a local pointing us in the right direction of Acorn Street, one of the most photographed streets in America.

But yeah – every turn of the corner prompted me to pull up my camera and take a shot. Beacon Hill is gorgeous.

We enjoyed ourselves so much that we took a few minutes to find (former Senator, current Diplomat) John Kerry’s house on Louisburg Square. I mean, why not? (That’s his and Teresa’s five-story place on the corner.)

While Amy was at another appointment, Shannon and I returned to a location from the previous night on our ghost tour, the Boston Athenæum.

Founded in 1807, the Boston Athenæum is one of the most distinguished independent libraries and cultural institutions in the United States. It grew out of a slightly earlier organization known as the Anthology Society which had been formed in 1805 by a group of Bostonians with the primary purpose of producing a magazine that they called The Monthly Anthology and Boston Review. In creating the Boston Athenæum, their purpose was to form “an establishment similar to that of the Athenæum and Lyceum of Liverpool in Great Britain; combining the advantages of a public library [and] containing the great works of learning and science in all languages.”

It was only $8 per person to walk the main floor, and upon seeing Dolly Parton’s Songteller: My Life in Lyrics on the center table, we knew we’d come to the right place.

Through the window behind the statue of George Washington, you can see the Granary Burial Ground.

The Boston Athenæum would make a killer space for a cocktail party.

I stared at this painting for a good long while. It’s titled “Interior of St. Peter’s, Rome” by Giovanni Paolo Panini in 1756.

I mean seriously – look at the contrast of light and dark:

Shannon and I took a chance and peeked through a back room. The door was open, so we felt like that meant we could go inside. Who knows? No one stopped us!

Once we had Amy again, we headed back downtown towards Congress and Union Streets to have dinner at The Bell in Hand, which claims to be the oldest tavern in America. We ended the evening with a walk at the harbor, which has me hankering for ocean time like nobody’s business. I cannot remember the last time I put my feet in the water.

We met for brunch the next morning before I had to catch a ride back to the airport and fly home. The zipper on my suitcase was already starting to break, but when the TSA agent had to inspect all six books, it broke fully. The good news is that I arrived home with my literary treasures in tact, along with a couple of t-shirts for the boys and my mug from Cheers.

Better still, I came home grateful for the opportunity to be an honorary Coley sister for a few days in a beautiful American city where I’d never been before. Thank you for the invite, ladies!