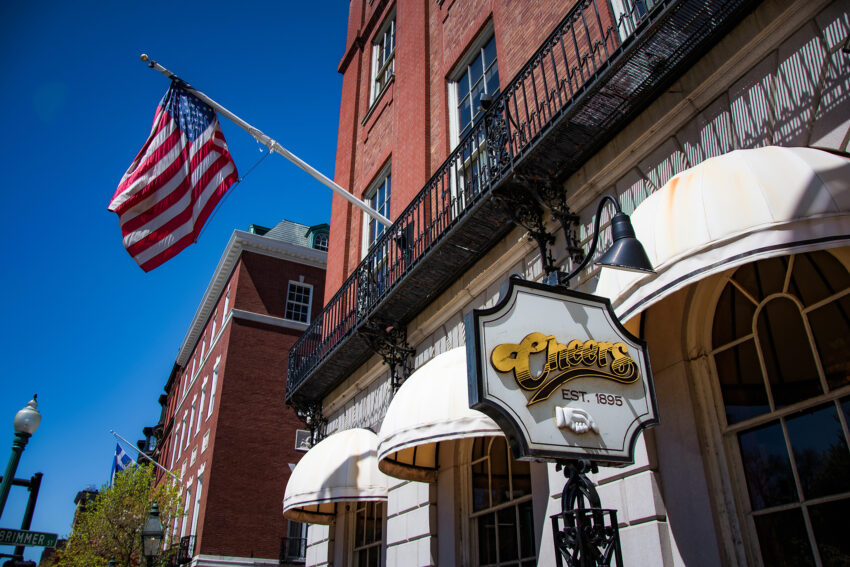 Monday in Boston was one satisfying discovery after another. The skies were clear, so the city looked glorious. We grabbed coffee at Cuppa Coffee, which was next to the hotel, and ended up going there two or three more times before leaving Boston. Then we hopped on the subway.

Again, I was grateful for Amy’s familiarity. When Karin and I went to England in October 2019, we arrived several days before Chuck (who was driving us to Wales) to piddle around London and Kent. That meant navigating the Tube and train system without the guy who usually navigates the Tube and train system. It’s not that I’m incapable. I just don’t pay that much attention to it. (For what it’s worth, Karin and I made only one mistake and had to backtrack a few stops. Otherwise, we nailed it.)

Like so many other big cities across the country, chunks of downtown Boston were near desolate. No businesspeople rushing to work. No street vendors. No advertising for events. I imagine this particular area, full of theaters and venues, would have a slew of people milling about. But on this particular Monday, we were three of maybe 20 people on the whole block.

Fortunately, one important place WAS open: Brattle Book Shop. This would mark the start of my suitcase problem on the return flights home.

It’s risky to take a girl like me to a place like this. I found four books that needed a forever home: Anglo-Saxon England by F.M. Stenton (1943), Black Women in Nineteenth-Century American Life, a collection of essays by women who were born free, freed before the Civil War, and freed by the Emancipation Proclamation (1976), The Beast in Me and Other Animals by James Thurber (1949), and Poisonous Plants of the United States and Canada by John Kingsbury (1946). The Brattle Book Shop was an absolute delight in every way.

I would go on to buy two more books – memoirs on writing – at The Harvard Book Store later that day: Consider This by Chuck Palahniuk and Pity the Reader by Kurt Vonnegut and Suzanne McConnell. My suitcase was not pleased.

Our walk continued through Boston Common and Granary Burial Ground, both of which we’d return to later in the evening for a ghost tour.

We continued on to King’s Chapel, which was closed on account of Covid, and its adjacent cemetery.

The engravings on each headstone were beautiful!

We walked back across Boston Common and the Public Garden to get to Cheers – the one place I knew I wanted to visit.

The restaurant and bar was exactly as you’d imagine, though instead of walking into one large room with a square bar (as seen on the television show), you walk into a tight space with a wall-length bar and weave through a maze of smaller rooms to find a seat. (These photos were taken with my cell phone, so they aren’t as good in quality.)

It was here where I tasted Downeast Cider for the first – but certainly not the last – time. Other than a few ciders I’ve enjoyed in England, this is one of the best I’ve ever tasted. (Yes, I bought the mug as a souvenir – yet another problem for my suitcase.)

Two Coley sisters and a Spare:

I had no idea the Salem Police Badge had a witch in the design. I am 100 percent pleased with this.

After lunch, we headed to Harvard, which is an old and sprawling campus. We visited another bookstore – delight! – and went back to the hotel to take a rest.

There’s a Whole Foods behind the hotel, so we gathered a few nibbly bits and some bottles of wine and made this our dinner for later. We booked a ghost tour for dusk, so we needed to rest our feet.

I took photos with my phone throughout the ghost tour, which was more of a walk with spooky storytelling. Steve, our host, was a gem and indulged our questions and conversation. I ended up Googling some of the stories later, particularly the ghost stories surrounding the Omni Parker House. Fascinating!

The ghost tour was a new thing for Amy, which I was glad about. She has not tired of coming to Boston each year (sometimes twice a year), but doing something new is always a good thing.