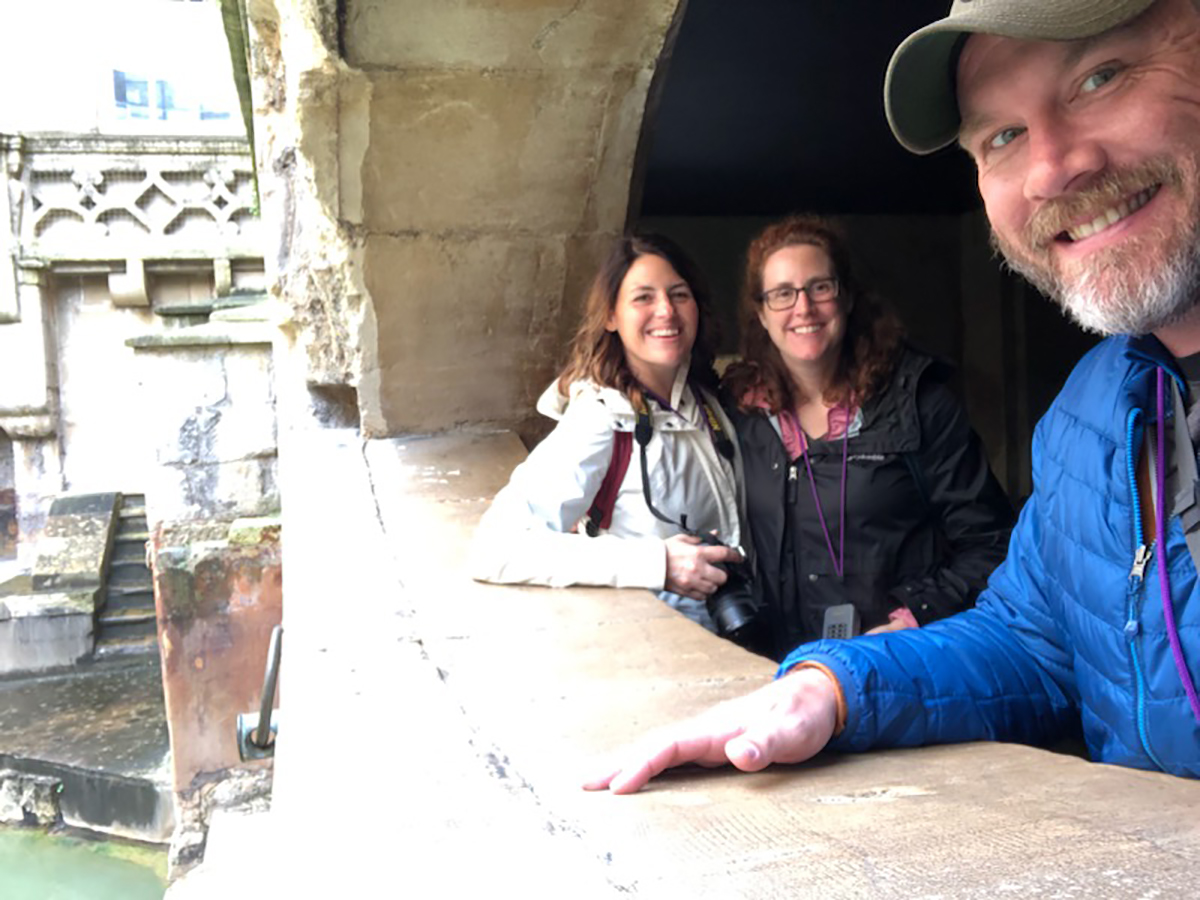 It was our final full day in the UK, and we wanted to make the most of it. Instead of heading straight back to London, we took a long way and swung south to Bath in Somerset. The architecture in this city is unlike anywhere else I’ve seen in England.

The Roman Baths date back to 60 AD (the Romans hung around for a few hundred years), and the Bath Abbey was built in the 7th Century.

I was instantly smitten with Bath. Every corner turned onto another charming, narrow street.

At first, it looked like our stroll around the Roman Baths was going to take hours. Without a doubt, it’s the most touristy attraction in town. Fortunately, they have the process down to some sort of algorithm that keeps the bodies moving forward.

The Roman Baths and Bath Abbey are right next to each other – convenient!

Normally, I’m not into guided tours and listening to recordings. I *never* pick up a headset in museums. However, at the Roman Baths, they just hand you one and tell you how to work it. Turns out, it was hugely interesting to walk up to a part of the exhibit and be told why it’s important!

I’m so glad Chuck this photo! We aren’t big selfie-takers, but I’m thankful he took this one 🙂

After touring the Baths, we went back into the city to explore a little longer and grab a quick bite to eat.

We ended up circling back to where we began, with a beautiful view of Pulteney Bridge and the River Avon.

We’d booked a hotel room at Heathrow that night so we could get to the airport easily Sunday mid-morning, but we still had plenty of time to spare before it got dark. A quick Google search showed us that we could stop in Lacock in Wiltshire, one of England’s oldest villages. This meant more driving through the countryside!

Lacock Abbey dates back to 900 AD and served as a filming spot for several scenes in the Harry Potter film franchise. Also, more recently, Lacock was a filming spot for Downton Abbey. It was a charming village, only a few streets wide and long. I didn’t take my camera around town since it was a little misty, but we enjoyed the stroll and treated ourselves to coffee, tea, and cake afterward.

It was finally time to admit the trip was over, so we checked into our hotel, Chuck returned the rental car, and we finished the night with dinner at the Hilton and two bottles of wine. Before the night was over, I made a list on my phone of everything we did over the last eight days – I didn’t want to forget anything!

In the last year, I’ve visited England three times. I never thought that’s something I’d ever be able to say. Believe it or not, I’d go back again tomorrow, next week, next month, next year. It is strange to feel at home in a foreign country, but that’s exactly how I feel.

If you want to watch the slideshow video I made of our trip, click here.