Michele bought wax lips for the boys when she was here and they could hardly wait to try them. They’ve never experienced wax lips before and it’s been eons since I had, so of course I grabbed my camera. While they winced at the taste, they wasted no time running around with them in their mouths. I just love how the sun is peeking through the trees in the background. East Tennessee is so beautiful right now, though winter is slowly making itself known. The big bursts of orange, red and yellow are tumbling to the ground, so it won’t be long until the trees are barren and the autumn colors fade. Chuck and I remarked that fall has lasted longer than usual, it seems. Instead of two weeks, it feels as though we’ve (rightfully) had a full month of it. If anything, I’ve definitely had a full month of eating candy corn. My waistline confirms it.

It is breathtakingly beautiful in East Tennessee right now, which meant it was the perfect weekend to run around at a corn maze and get our pumpkins.

END_OF_DOCUMENT_TOKEN_TO_BE_REPLACED

On a great recommendation, we set off for Indian Boundary on Thursday afternoon. We haven’t camped since we went to Hyde Memorial Park outside Santa Fe (which was one of our favorite trips ever), so we’ve been very eager to go. October is the best time of year to camp in East Tennessee, so we got right to it. Indian Boundary is just south of us in Cherokee National Forest. (More photos behind the cut!) END_OF_DOCUMENT_TOKEN_TO_BE_REPLACED

Welcome, October! You are loved in this house.

The boys are already talking about Halloween costumes and trick-or-treating plans, but I’m having none of that just yet because I plan to enjoy all the other 30 days of October first. Yesterday I brought out the ceramic and blown-glass pumpkins from the holiday containers, as well as the faux autumn leaf garland and pumpkin spiced candles. Fall is here, and I’m not going to wish it away so fast just to get to Halloween.

This truly is the best month to be in east Tennessee. Spring time is a close second, but there is nothing like watching ripe green summer leaves turn every shade of orange, red and yellow.  The temperatures are perfect for open windows, evenings on the front porch and star gazing. (Camping trip to come!)

Halloween will certainly be celebrated, especially because our favorite feline will turn another year older and we wouldn’t miss an opportunity to spoil him rotten.  Of course, we don’t know Salem’s real birthday, but October 31 seemed appropriate, so I declared it as such.

But first, there is much to do in the way of visiting pumpkin patches and getting lost in corn mazes. There’s also an anniversary to celebrate (12 years!), friends to visit, and a slew of great football games to watch. Happy Best Month of the Year! Let’s celebrate with a new bag of candy corn, shall we?

The good news is that we have met the legal requirements for completing a full year of homeschooling. The bad news is that Jeremy still has a couple of days left of work. (Jackson is finished.) Since my brain has already left for summer vacation, we’re taking Jeremy’s last few days of work less seriously. He knows he needs to finish, I know he needs to finish, but whether he finishes today, tomorrow or Friday is irrelevant to me. I’ll turn in attendance and grades in a week and we’ll officially be done. Thank goodness.

We’re still going to study conversational French this summer but we’re taking a break from anything useful until mid-June.

However, on Saturday I started talking to the boys in a little basic French, teaching them how to say, “Excuse me. Hello! My name is so-and-so. And you?” We were sitting under a magnolia tree on the campus of Maryville College at the annual Highland Games. Chuck was in the dining hall for a whisky tasting so the boys and I chatted in French while we waited. They got a kick out of hearing me and one another speak another language. Jeremy did quite well and Jackson giggled through all of it. I was so amused.

The Highland Games were extraordinary! We missed them last year because of Chuck’s travel schedule so we were sure to go this weekend. This area is rich with Scottish heritage, so we were wide-eyed at all the kilts and bagpipes. When Jeremy asked why the men wore skirts, we were able to ask a real Scotsman about it – his name was also Jeremy, so that was a little bonus. Out of all the activities, I wanted to see men in kilts throwing heavy things, like logs.

My little men looked quite handsome for the games.

By the end of the day were were sun-kissed and worn out. We’d perused the tents, watched sheep herding, and enjoyed traditional Celtic music. From any standpoint you could look beyond the tree line and see the Smoky Mountains. It was yet another day when I took a moment be thankful for living in such a wonderful place.

My Lego Harry Potter Years 5-7 game arrived on Friday. I jumped for joy in the kitchen after opening the box and scoured the game case for details. The boys joined my celebration but it stopped short when I explained they wouldn’t be playing the game with me. (Major groaning followed. Why not? That’s not fair! It looks so cool. Please, Mom, please!) It would be irresponsible of me to allow them to find out how the saga ends via Xbox. They need to read the books, or at the very least, see the last few movies.

I crawled into bed sometime after 1 a.m. after three hours of playing. By Saturday afternoon, I completed Year 5. What a geek.

Sunday was delightful. I ran an easy 10 miles. Surprisingly easy, I might add. There’s not been a single long run in my entire training that has felt impossible or even challenging. (Knock on wood.) It might be because I’ve worked hard to increase my speed or because I’m wearing the perfect shoes for my gait. It might even be because I’ve stopped listening to music during my runs and listened more closely to my body. Whatever the reasons for it, I’ve been most pleased. To my recollection, I’ve never before felt this calm the week of a race. Here’s hoping the weather holds out.

The boys enjoyed the weekend, too – all four of them. Chuck and the littles had Boy Time finishing Jeremy’s Pinewood Derby car, building a birdhouse, going out to breakfast together and getting the car washed. Salem spent hours laying in the sun and running amok at night. (He got a stern lecture Saturday night after waltzing home at midnight.)

To my own surprise, I didn’t take a single photo this weekend. I KNOW. I missed all that footage! So instead I’ll end with a video from our field trip to the Little River. 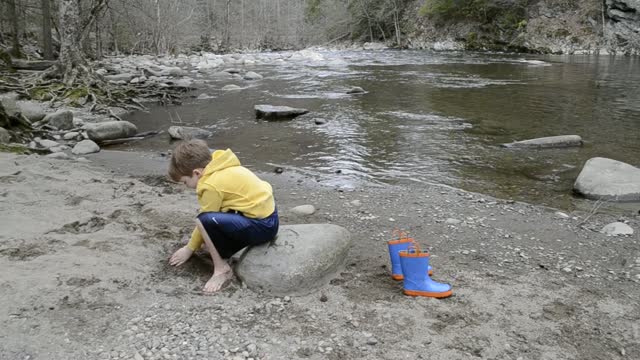 We had to get out of the house last night before one of us ended up in the corner indefinitely, myself included. Attitude was oozing all over the place.

So after returning our library books, we drove over to feed the ducks at the Greenway. Though it was a bit chilly outside, dusk was looming, and we needed to take advantage of what little daylight we had left. 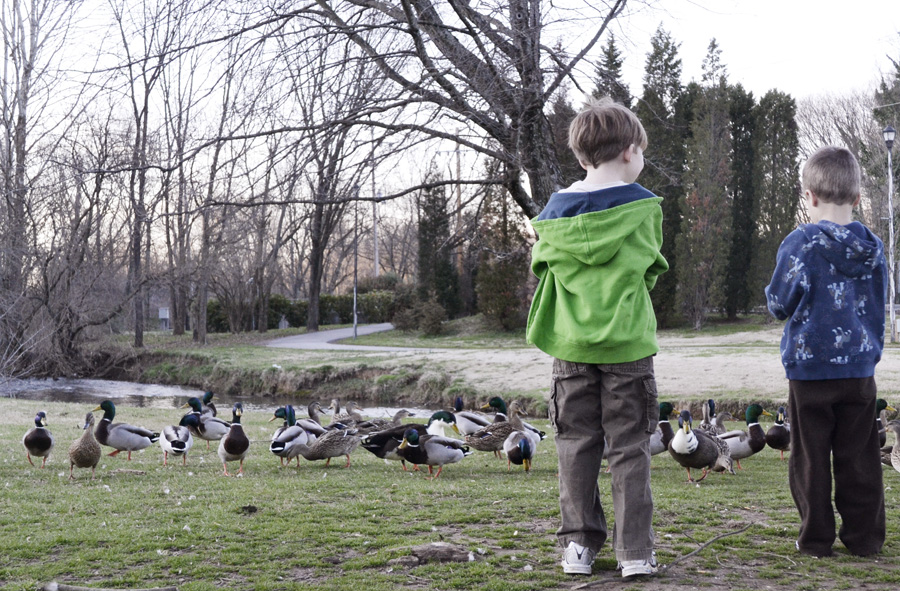 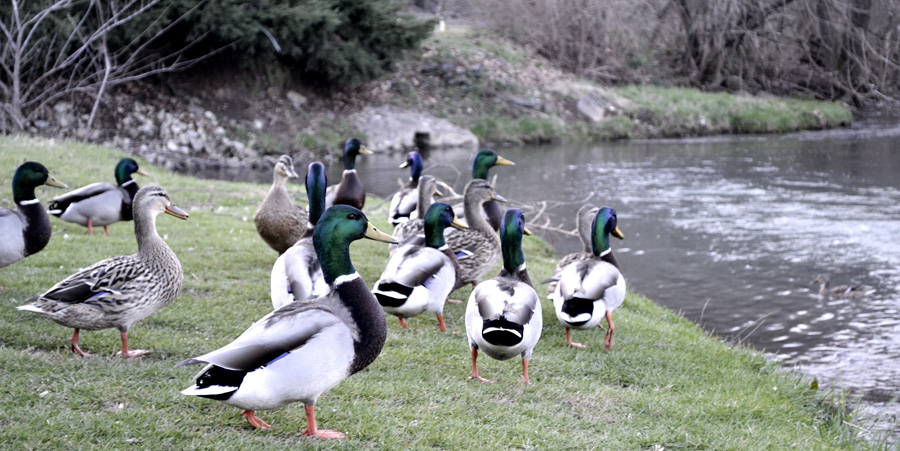 Even in the middle of winter, when the trees are stark and the sky is gray, I find this place so beautiful. It’s a wonder what a little pretty will do for the soul. 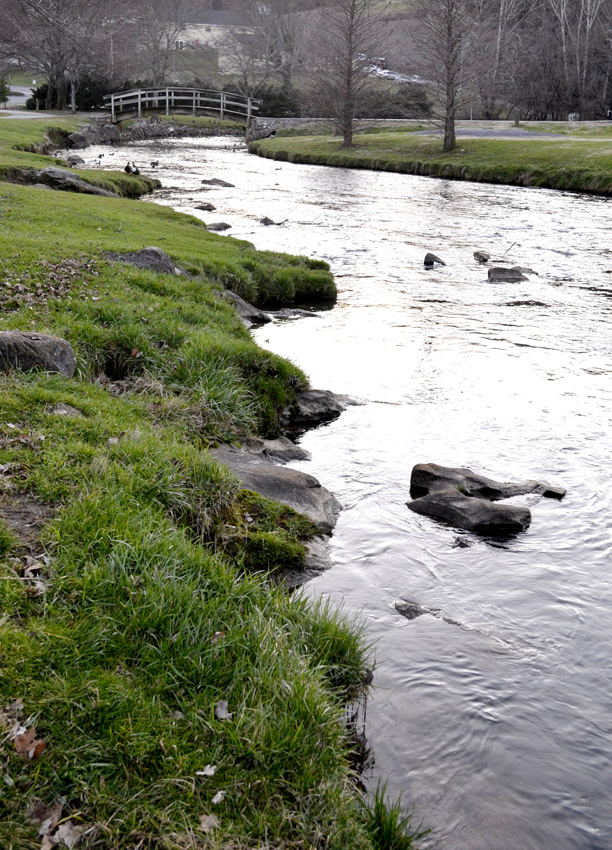 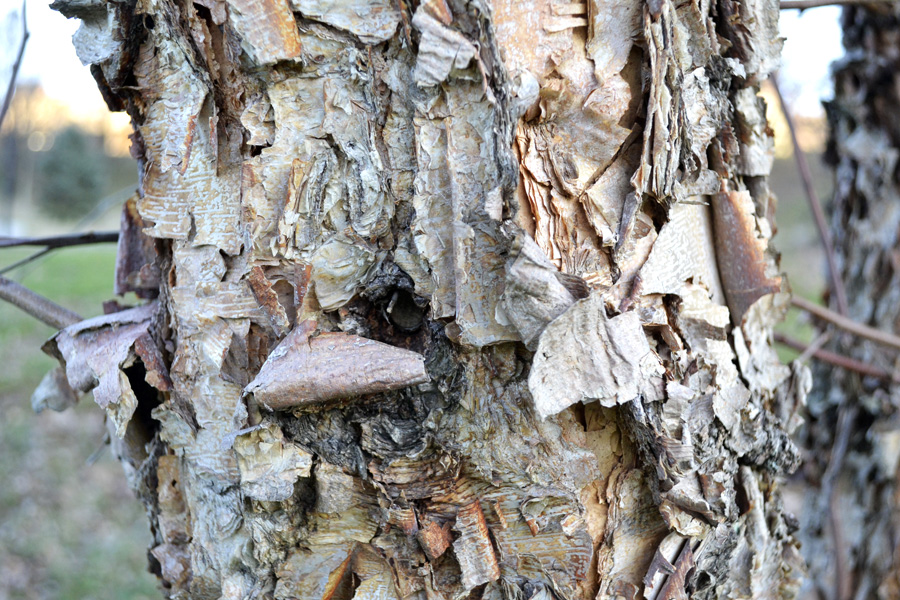 When we got home, our attitudes were cheerful and we were able to carry on with the evening with some level of decorum. It seems like all we needed was a breath of fresh mountain air.

When a hotel room costs only $8, it’s kind of a waste to not stay in it. Actually, the hotel room was free. We paid $8 for overnight parking downtown. (Chuck’s hotel points covered the rest.)

So off we went to Chattanooga for a whirlwind Halloween night. We trick-or-treated with Ethan and Sidney and enjoyed a quick swim afterward in the hotel’s heated saltwater pool. The kiddos zonked out after many failed attempts to dig through their candy sacks.

Guess who was tuckered out after the big night? 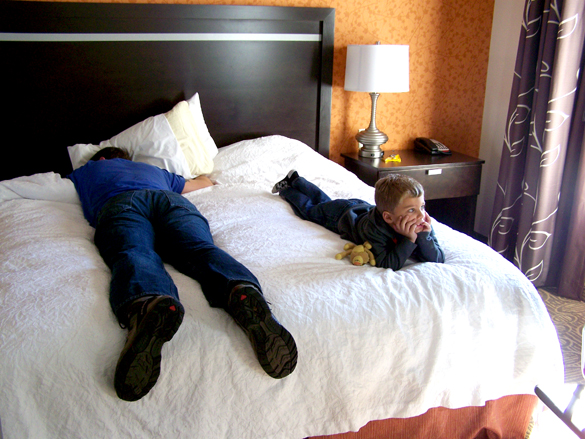 This morning, since we didn’t have anywhere else to be, Chuck and I ran (separately) through downtown Chattanooga. It was a chilly morning, a little foggy, but otherwise perfect for a jog through our old stomping grounds. Once we were cleaned up, we took the boys for a walk around town and headed to lunch. Major props to the city planners because Chattanooga is more beautiful than it’s ever been. 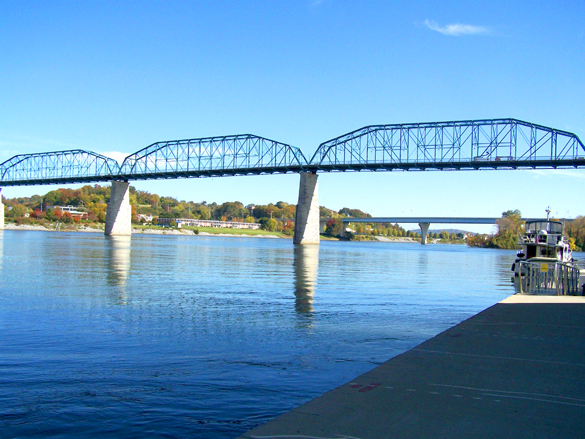 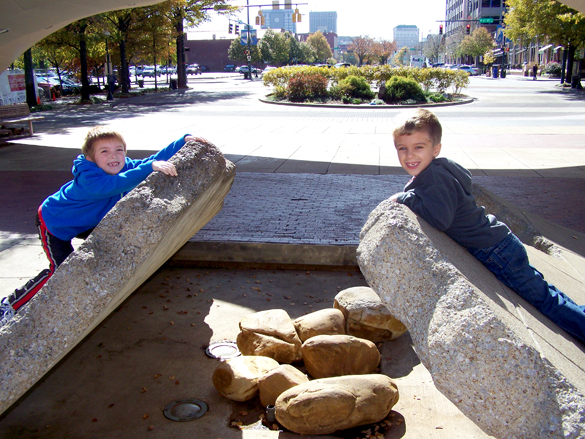 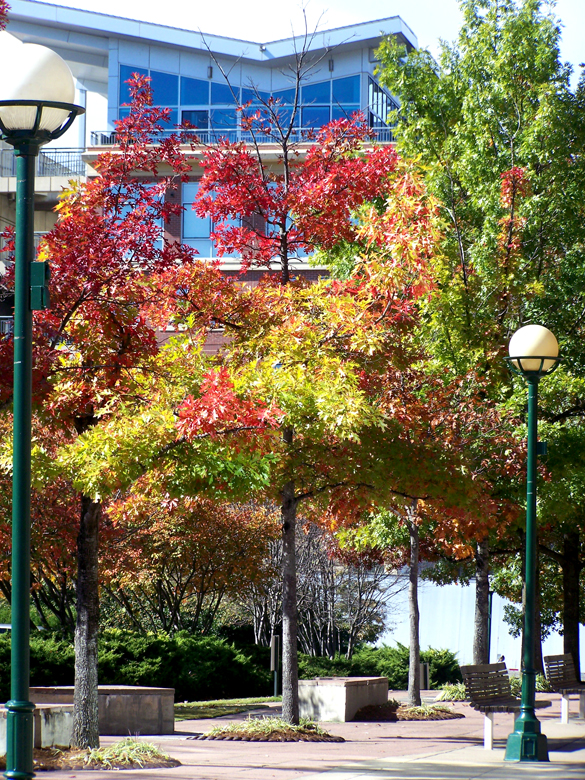 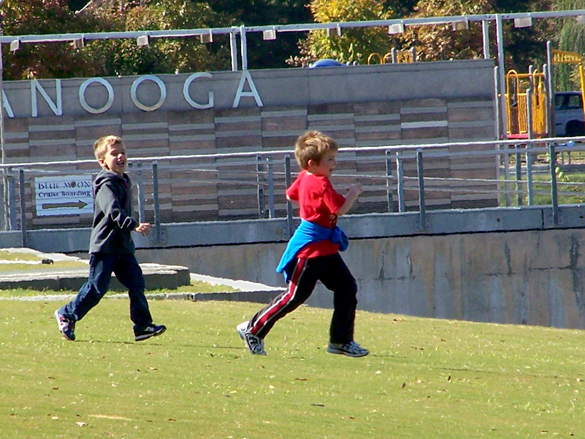 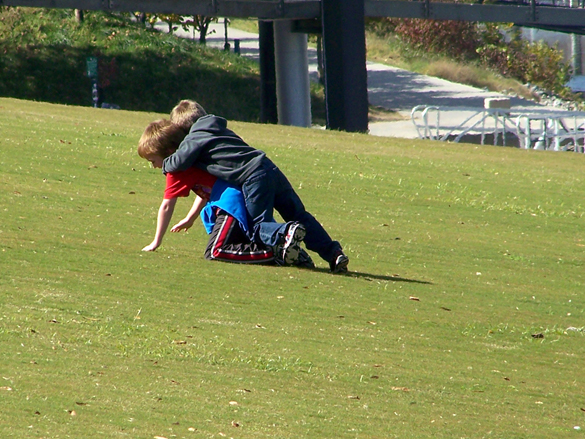 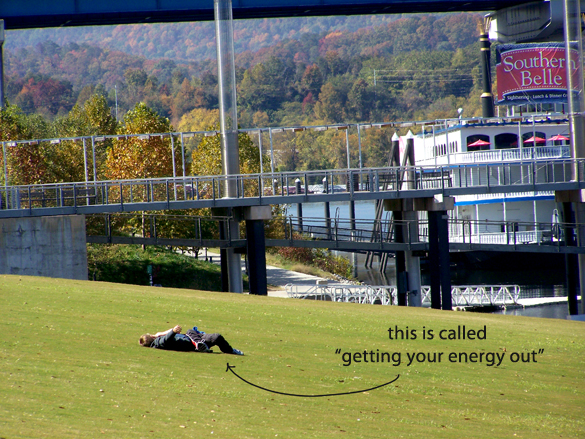 After lunch, we headed home to the mountains. If I haven’t said it before, or in case you weren’t sure, I am very, very, very happy to be in east Tennessee again.

We went to a local pumpkin farm and corn maze on Saturday to officially celebrate October. It was an overcast, chilly afternoon and I wouldn’t have wanted it any other way. East Tennessee is about to explode with color and we’ve got a front row seat to watch.

Exactly one month ago I showed you how the backyard was filling in – see here. Then, a few weeks later, it looked like this:

The structure behind our property is entirely hidden and a huge heavy tree limb hangs over the playground. I absolutely love it.