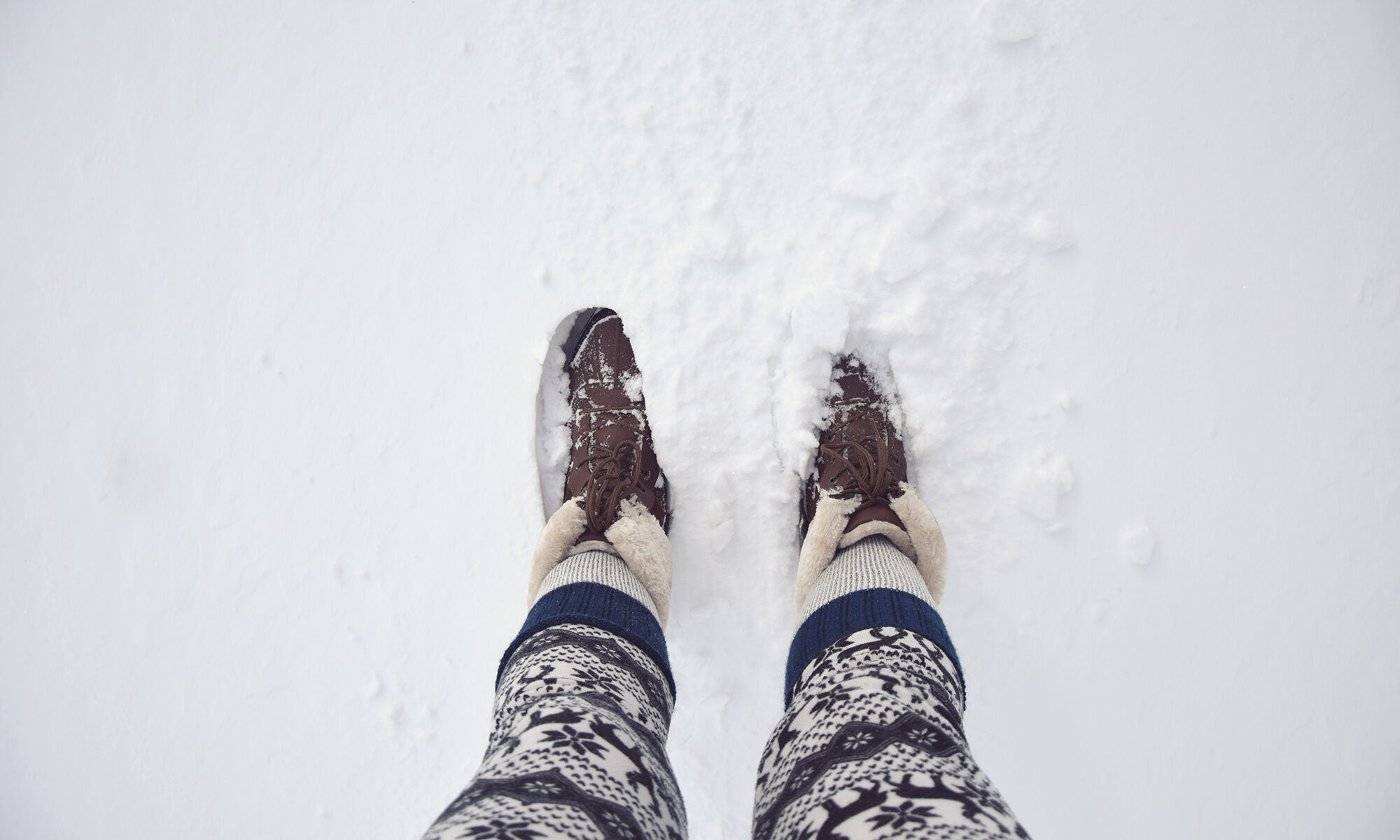 After a bit of research, we chose a lovely cottage on Sugar Mountain in North Carolina. Chuck wanted to take the boys skiing for the first time, and Mom and I wanted to hide from the world for a bit. We arrived on Wednesday afternoon, just in time to go grocery shopping and get back to the house to make dinner. I poured Mom a glass of wine, and she was all set.

Christmas Eve was a rainy day, but a winter storm was coming. Underneath the snow that fell all evening was a solid sheet of ice by the following morning. It was beautiful, but we knew getting down the mountain was going to be a challenge.

We exchanged a few small gifts on Christmas morning and then occupied ourselves trying to figure out how to get Chuck, Jeremy, and Jackson down the mountain to the ski lodge. Fortunately, there was a taxi service (with four-wheel drive and all-weather tires) that picked them up and dropped them off. This meant Mom and I had the place to ourselves for an afternoon reading marathon.

The day after Christmas proved most beautiful because the sky was bright blue. With the winter storm out of the way, Mom wanted to take a quick trip outside on her new hip to get some photos. Of course I had to chaperone! The last thing we needed was for her to fall down.

This is the view directly across the street from the cottage. On the other side of those houses are the ski slopes. If you looked hard enough, you could see the ski lifts and folks skiing down the mountain. (We weren’t close enough to get a glimpse of Chuck and the boys.)

Jackson was brave to try skiing on Christmas Day, but he opted to join the reading club the day after Christmas while Chuck and Jeremy went a second time.

Of course, Dad wasn’t far from our minds. We knew the first Christmas without him was going to be difficult, but being in this cottage, away from all the reminders back home, helped us cope. He wouldn’t have wanted us to stay home and mope around, fighting tears and shaking a fist at the sky. Even when I was a little girl, he never liked us moping around. Get up and get on with it!

The cottage was perfect for our getaway. We all had a warm bed and space to schlep around in our pajamas. We watched movies, ate our weight in sugary treats, and only did the things we actually wanted to do. This was a huge bonus for me. I didn’t even bring my laptop! After staying home all year to take care of Dad (and follow pandemic guidelines), a quick trip to the snowy mountains was exactly what we needed.

The next big hurdle is New Year’s Eve, a holiday that’s always been marked by a big, boisterous phone call from my parents wishing us a Happy New Year. Dad would call us promptly at midnight, all giggly and loud, and I’d laugh and roll my eyes at how goofy they sounded.

Now I’d give anything to have that phone call at midnight. Instead, Mom will stay the night with us, but I’m not totally sure I’ll stay up to watch the ball drop. The quicker I fall asleep, the sooner I can leave this wretched year behind.

Christmas, though, was delightful. There were moments of sadness, obviously, but now I’m ready to start a new year without illness or fear or a heap of doctor’s appointments weighing us down. I’m ready for a slower pace, if you can believe that. I’m ready to walk into a calmer year.

The first time I went skiing was in 1999 with a recreation group in college. It was to Steamboat Springs, Colorado, and I was venturesome and fearless. I loved everything about skiing – the atmosphere, the smell of the air after fresh-fallen snow, and how unbelievably exhausting the whole ordeal was. It took me two hours to ski down one green slope (for beginner level skiers), but I didn’t care. I loved it. I recall falling only once.

The second time I skied was the last week of 2006 on Sugar Mountain in North Carolina. Again, I was fearless. Though I used more caution than I did in Steamboat, I still took the slopes with confidence.

Chuck and I were together both times, and both times he left me in the dust with his greater sense of adventure and a need to ski down the blues (intermediate level skiers) and a modest black diamond (really brave skiers) every now and then. That was fine with me because I did not want anyone – him included – waiting for me while I piddled down the mountain at my own slow pace.

Fast forward to today. It’s been four years since I’ve skied but when Chuck suggested we have a go of it in Santa Fe, I thought – sure! I love skiing! I’m a skier. I really enjoy skiing. Why not take a few turns down the mountain while we’re in the neighborhood?

First of all, I fell of the lift.

Second of all, this is what I saw after taking ten minutes to get up and reattach my skis. 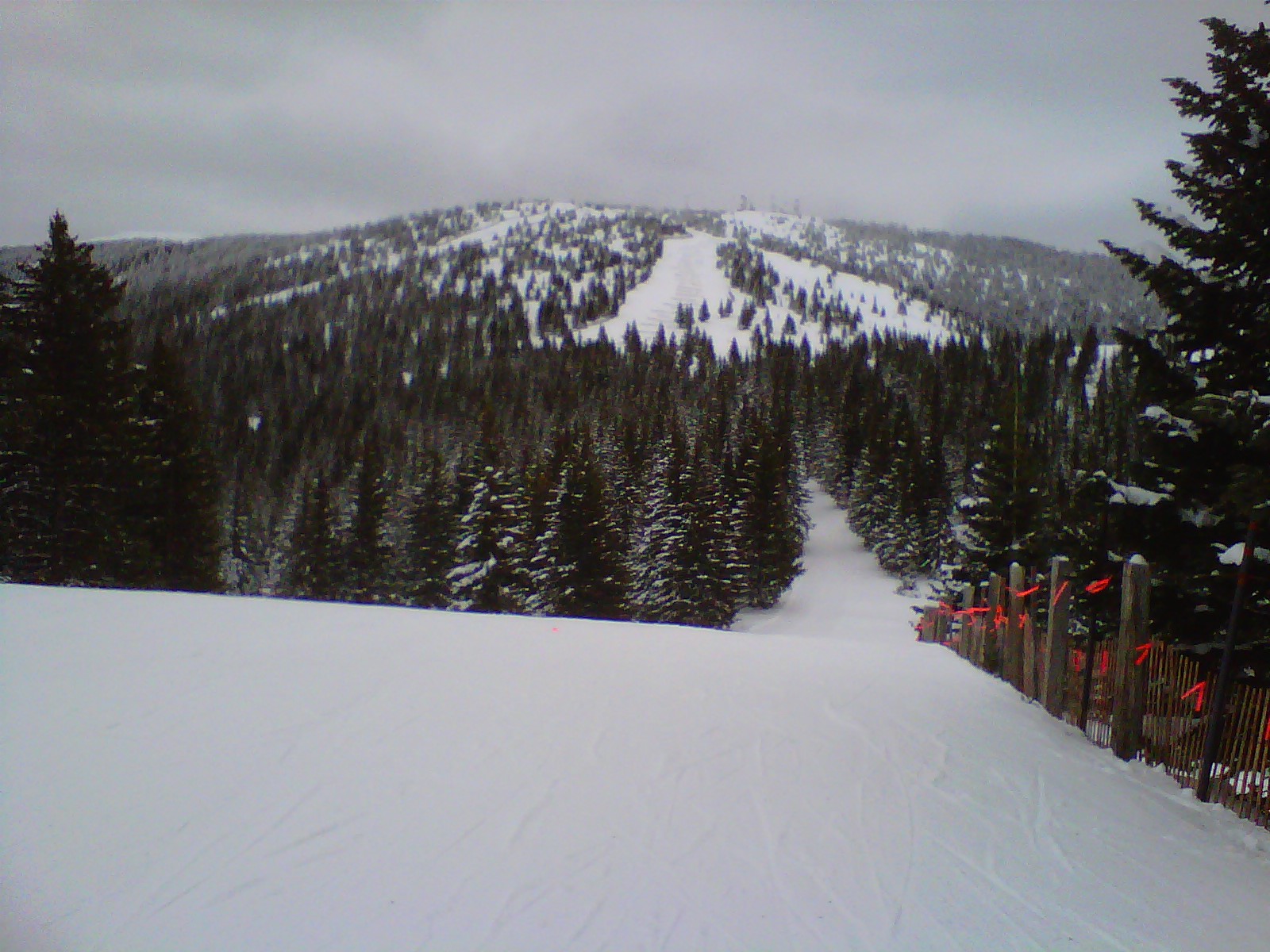 Um, really? What you can’t see is that just below this drop off is a sharp left turn down a blue, which frightened me because I’m terrible at skiing in the direction in which I’d like to go. I kinda just go all over until I get stuck – or in the case of today, fall over in fear.

When I finally stirred up enough courage to tackle the first run, I realized quickly that today wasn’t going to go my way. Past the curve of the trail was a fishhook left turn that I inevitably failed to handle. Again, I fell. Though I only had two previous skiing experiences to draw from, I have scads of other events in my life that required physical exertion – six half marathons, one full marathon, canoeing 94 miles on the Rio Grande, hiking 10 miles along the Cumberland Trail in the snow – for Pete’s sake, why can’t I stay on my skis?

And furthermore, why on earth was I so scared?

I finally coaxed Chuck to go on without me, as his watching and waiting was making me anxious and angry. He was doing the chivalrous thing, but I am a stubborn woman and I didn’t want to be hand-held. He asked me, “Are you sure?” about 5,000 times, and it was only after I threatened to stab him with a pole did he finally spin around and ski out of sight.

To make a long story short, I fell three more times, and it was the last time that I took off my skis, pulled them in my arms and walked down the mountain. I was done.

I have no idea why I couldn’t keep my balance, why I couldn’t make my skis go the direction they needed to, or better yet, why I was so scared. By the time I got to the bottom my legs were aching (ski boots aren’t meant for walking downhill, after all) and I had to make myself calm down about what I perceived to be a complete failure. I threw my equipment on the rack and took a seat to wait for Chuck.

About an hour later he was also done and we returned our rentals. On our way out I told Chuck that next time I need to take lessons so I can officially learn how to ski.

“Next time? I didn’t think there’d be a next time,” he said.

“Oh yes. I’m doing this again, but I want proper lessons,” I told him.

All I heard in my head along the walk back to the car was that little voice of wisdom. It was Yoda – Do or do not. There is no try.