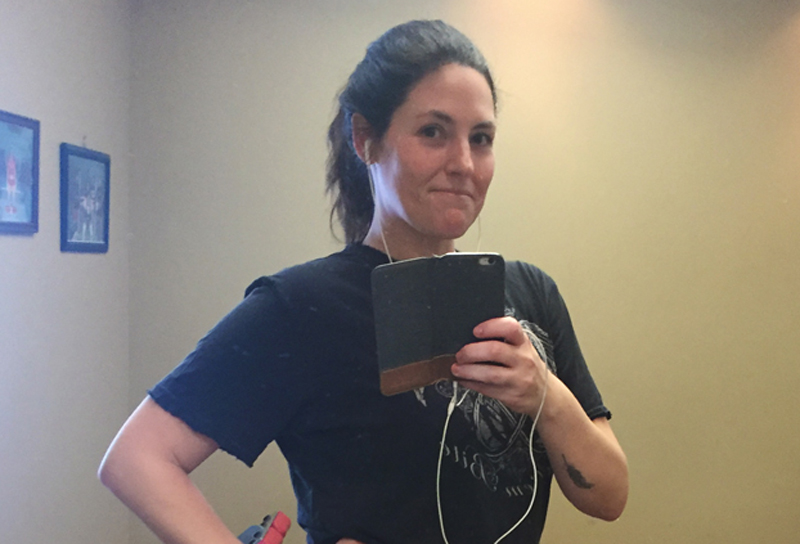 When I was 15 years old, I was easily 70 lbs. heavier than I am right now. I was unhealthy and insecure, but when I started Rollerblading on the weekends in an attempt to lose weight (hey, it was the 1990s!), I never thought it would lead to a lifetime of enjoying exercise.

Fast forward TWO DECADES and I’m still at it. Though my Rollerblades have long since been retired and replaced with running shoes, a gym membership, and a yoga mat, I still enjoy the mental and physical release exercise gives me. It is for my brain first and my body second.

It’s a curious thing, then, to still struggle with body image, self-esteem, and all that emotional garbage I’ve been carrying around for most of my life. It makes no sense whatsoever, but that is the nature of the beast. It is my lot. But I continue to exercise – and continue to love it – because this is the one body I have. There’s no swapping it out for another.

So today, after my workout was complete, I did the thing that I never do: I snapped a photo of myself at the gym. I felt silly doing it, but in that moment I wanted evidence that I am alive and healthy and able to do many things. 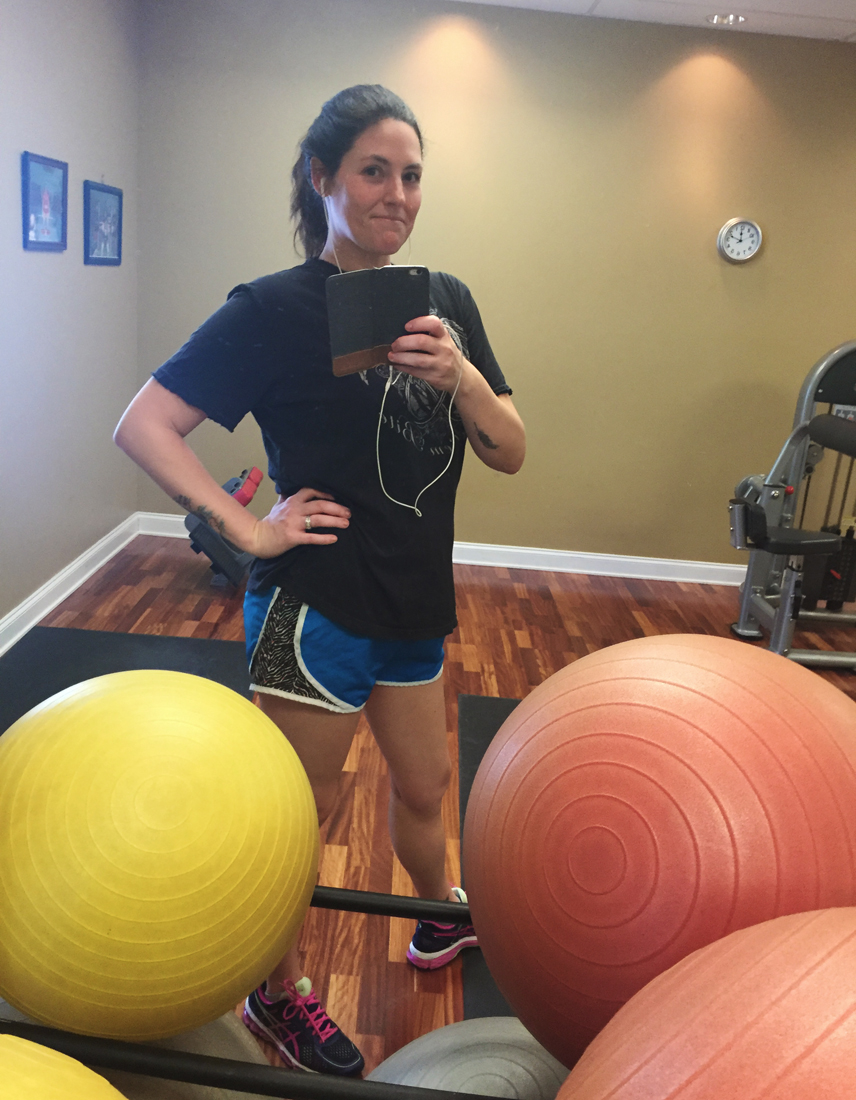 One day I will not be able to do this. Today is not that day. 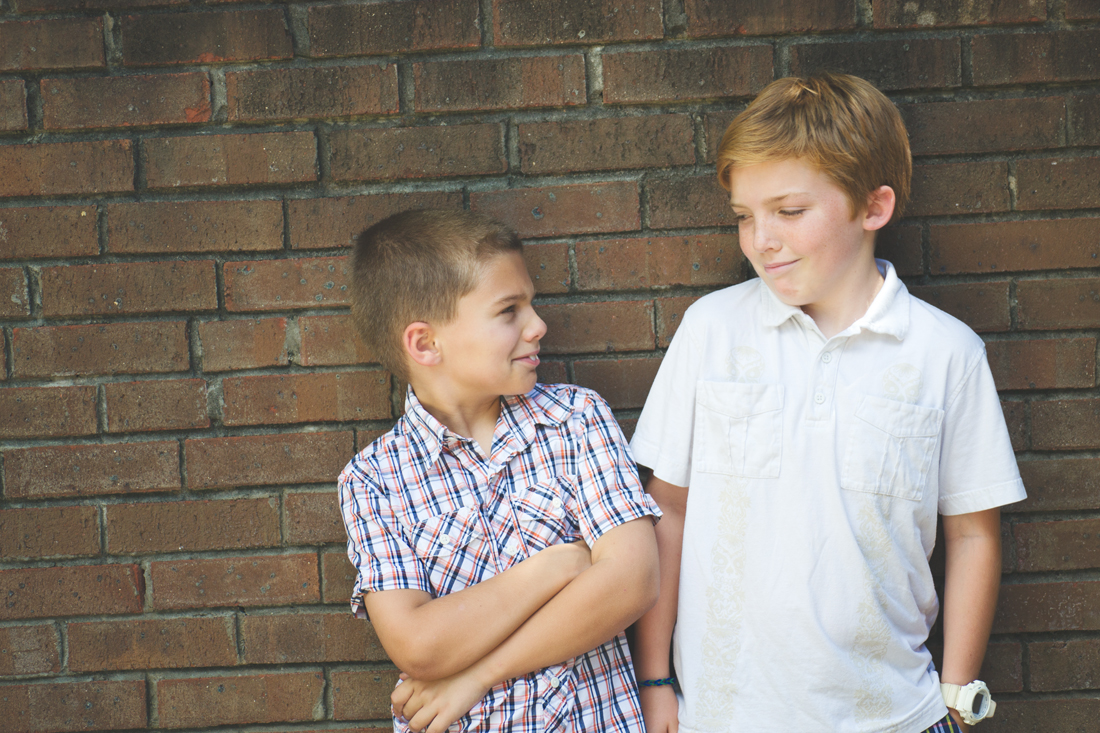 I was so glad when we were given boys: the first boy in 2003, the second in 2006. Two boys meant we’d never have to deal with self-esteem issues, body image problems, and disordered eating. Sure, we’d have other stuff, but not that.

Boy, was I wrong.

Growing up a chubby kid, and then a very overweight teenager, I was pleased with my emaciated senior high school self. Not only did I drop 85 pounds through disordered eating and excessive exercise, I’d also gained some attention. Boys finally noticed me. People called me pretty. No more did I hear, “You have such a pretty face.” (Which is an insult, if you didn’t know.)

My poorly patterned lifestyle waned halfway through college. I decided not to actively destroy myself anymore. The heart palpitations ended, I stopped being anemic. There were some permanent repercussions, but nothing life threatening. Though the weight I gained back – nearly 30 pounds – was difficult for my brain to process, I just kept telling myself, “This is what’s healthy. This is okay.”

Ah, but it’s never been okay. The body dysmorphia remains. It still haunts. I manage it.

From the first time I started thinking about motherhood, I crossed my fingers for boys. Boys don’t have body image problems. They don’t care about weight and size and the way their clothes rub against their bodies. They are not like us. They are not like girls.

When Jeremy and Jackson came along, I breathed a sigh of relief. We would dodge these demons entirely.

Only recently did I recognize the ignorance in my lopsided reasoning, and by “recently,” I mean in the last five years. As I’ve watched puberty creep onto our doorstep, I’ve been slapped into reality. Body image struggles are not exclusive to one gender. They haunt some and ignore others. Whether we had boys or girls was irrelevant.

This morning I watched a poignant video that reminded me that healthy self-esteem and body image don’t always come naturally. How we respond to our children in this arena – boys and girls alike – can shape who they become as adults. Will we engage in conversation about body image or will we be dismissive? Will we take their worries seriously or will we shrug it off as a phase? Will we watch for signs or assume there won’t be any?

There is also a balance to keep, because whether the emphasis is positive or negative, too much emphasis on physical appearance isn’t healthy.

If you are a parent, especially if you have a son, take seven minutes and watch this video. May it serve as a reminder that insecurity can plague every single one of us.

I’m having a moment here.

Eighteen years ago I was in the second semester of my senior year of high school. I attended an all-girls school but was enrolled in a coordinate program with the all-boys school across town. It wasn’t about the boys, lest you think so. McCallie had better writing classes, like Journalism and Short Story, and I’d heard good things about Senior English with Mr. McNiff. (Damn his pop quizzes!) I know a lot of girls enjoyed being around the boys, but I was painfully shy and didn’t socialize much. My sole interest was in writing.

This time, eighteen years ago, I sat in a classroom surrounded by boys reading and writing short stories. Today, I’m sitting in a “classroom” surrounded by boys (two humans and two pets) reading and writing short stories. To make this time warp even better, I still have my notebook from high school. In it are all of my old stories and the stories of my classmates. Time warp, indeed.

Stuffed between the short stories are reports and exams from English class, and on each piece of paper is the pledge. At the time, it was an annoying little task — to scrawl the same line of promises over and over again — but now I think it’s brilliant. I wonder what would happen in our public schools if we enforced the honor code.

I also have pages of unrelated scribble of other things that consumed my brain at the time, like calculating college tuition and – sadly – how many calories I needed to cut to lose more weight. Maybe this is why I hate numbers so much. I weigh a good twenty pounds more now than I weighed when I was a senior, but you can’t tell an 18-year-old girl that her weight is fine. Heck, you probably can’t tell a 35-year-old woman that her weight is fine.

It’s a bit of hoarding, I know, but I’m glad I kept things like this. Sometimes your memories lie to you. They get rewritten or forgotten. In notebooks like these, the handwriting is a transportation device. I’m launched into the past by its familiarity, by its honesty. Even then, I wanted to know how to write a good story, whether in fact or fiction. Writing has always been that one thing.

I’ll start my first short story this week. The plan is to use cursory characters from the novel as main characters. It sounds a little lazy (or is it genius?), but ultimately I think it will help refine plot lines when the editing process starts. Since I intend on making the novel my capstone project for graduation, I think short stories are a great way to weed out what’s unnecessary in the novel or add something that might be imperative.