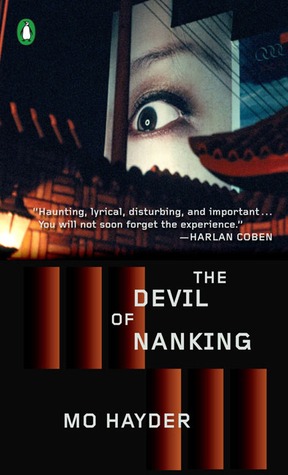 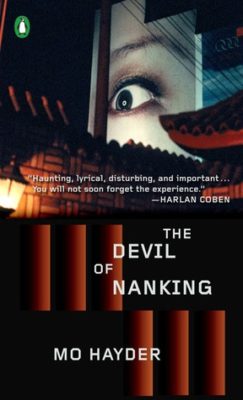 I get book recommendations from myriad places – friends, acquaintances, online reviews, etc. It was from BookTube (the small literary corner of YouTube) that I heard about The Devil of Nanking, and on a whim I decided to try this thriller/horror/disturbing story.

Grey is a 23-year-old British woman who is convinced she’s not crazy. Once, when she was 13, she read something somewhere that she believed to be true, and she’s spent nearly a decade trying to prove she didn’t make it up.

“Sometimes you have to go a long way to prove things. Even if it turns out that you’re only proving things to yourself.”

Her efforts take her to Tokyo, Japan, in search for a rare piece of film footage shot during the 1937 Nanking Massacre – a real historical event, by the way. (You may click here for more information, though prepare for disturbing content.) She has little money, little means to earn money, and yet she wanders Tokyo anyway, hoping for stars to align so she may put eyes on that film. Soon Grey finds Shi Chongming, one of Nanking’s few survivors, a reclusive man who initially refuses to help her.

But of course, he relents under the agreement that Grey do him a favor – pull strings at the hostess club where she works and find the one thing he, too, seeks… Roles reversed, Grey works for Shi Chongming, even though every step forward takes her down a darker path.

You guys, I read this book in two days. Sure, I was sick and only moved from the bed to the couch and back to bed again, but still. The Devil of Nanking is one hell of a story – fast-paced, cleverly woven, and expertly drawn out amid two separate time periods. It is indeed a thriller and entirely disturbing, but it’s not a horror book in the sense that it’s out to make you cringe. Rather, it’s out to open your eyes to what one human can do to another human.

Five stars all around – for mature audiences only.

Buy The Devil of Nanking here.