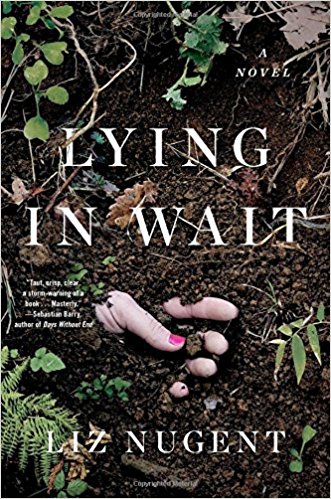 Since I have another half marathon coming up – in a few days, no less – I’ve kept on with audiobooks. Music does not do for me what a good book will, and that is to keep me moving forward, no matter how fast or how slow.

I selected Lying in Wait because Audible recommended it to me based on previous books I enjoyed. Clearly, I have a pattern.

Lying in Wait, set in 1980s Dublin, begins with an abrupt, impassioned murder and subsequent burial in haste. That someone has been murdered is not in question. Rather, what led to the murder and what happens after the fact is the real story.

The narrative unfolds from three perspectives:
– Lydia Fitzsimons, the reclusive woman who administers the final blow to Annie Doyle, the poor girl who died. Lydia’s husband, Andrew, tried to kill her, but he was unsuccessful. (He was successful in burying her though.)
– Laurence Fitzsimons, Lydia and Andrew’s son, a spoiled, obese and bullied young man whose troubles started at birth
– Karen Doyle, Annie’s sister, an unsuspecting beauty who refuses to let go of the mystery behind her sister’s disappearance

The perfect marriage of these three points of view kept my attention 100 percent of the time. The dramatic pauses, the woven storylines, the absurdity of Lydia’s psychosis – it was captivating! This isn’t a story of whodunit. We, the reader, already know this. What we learn is WHY it happened and WHAT WILL HAPPEN NEXT.

Lying in Wait is a rich psychological thriller that kept my attention until the last word.

And even then, I was stunned. Super well done.