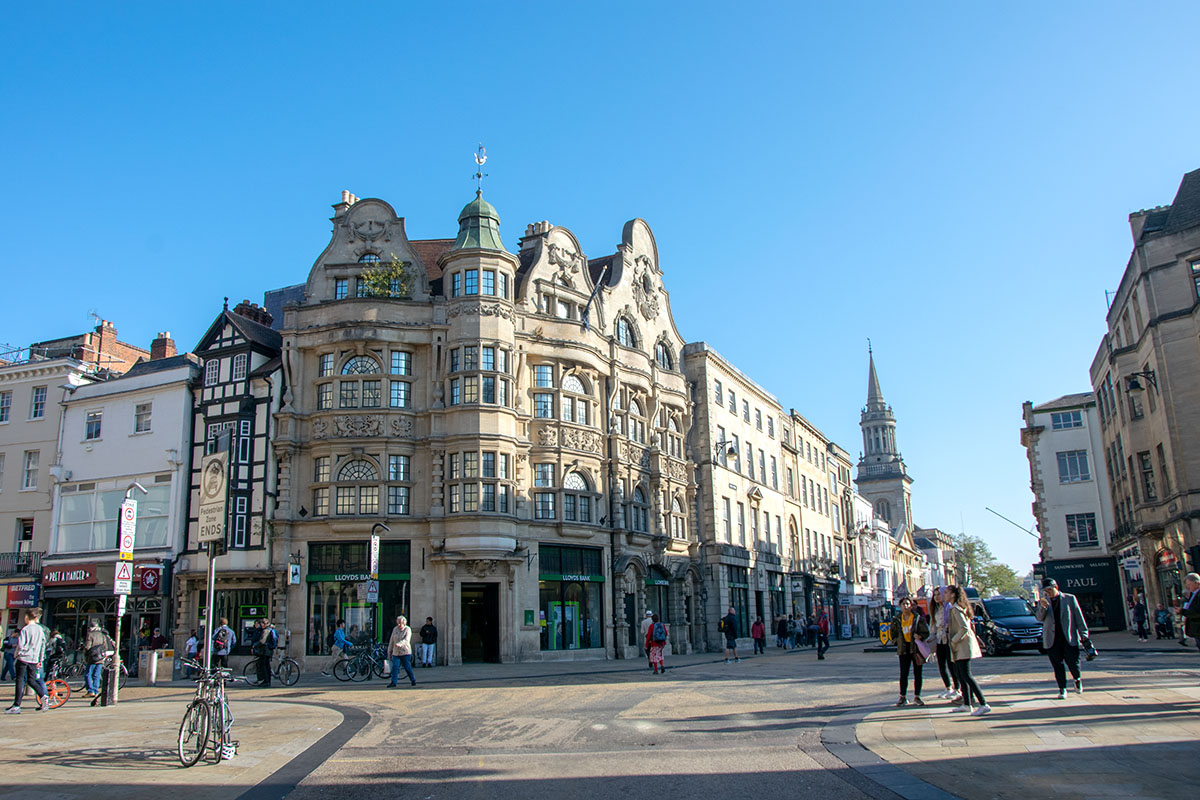 The plan for Wednesday, October 10, was to spend the morning walking in Oxford and driving through the Cotswolds before the long drive north to Newcastle Upon Tyne.

Before getting on our way, I made breakfast for us in the tiny red kitchen of our Airbnb. The stone building is an old converted pub in Cassington. The owners live in front, and the rental space is in back.

The map for the day:

The architecture in Oxford is a magnificent collage of Neoclassical, English Gothic, Saxon, the occasional Post-Modern, and more. It is a vibrant feast for the eyes.

Home to 38 colleges, Oxford University serves as a foundational intersection of education and history. Everywhere you turn, there’s another college paired with a different style of architecture.

Though I wanted to absorb all I could in Oxford for the many reasons Oxford is wonderful, I had one singular item on my must-see list: The Eagle and Child.

The Eagle and Child home to the Inklings, a literary group formed by C.S. Lewis, his brother, Warren, J.R.R. Tolkien, and other academics. The relationship between C.S. Lewis and J.R.R. Tolkien was key not only in their mutual love for creating fantasy worlds (Narnia and Middle Earth, respectively) but also for the constant wrestling with religion. Lewis openly credits Tolkien for his encouraging his return to Christianity.

The revolving group of members (albeit “member” is used loosely, as there were few, if any, rules) kept to a corner of The Eagle and Child where their agreements and disagreements could be shared over a few pints.

We did what was necessary and enjoyed a couple of pints in honor of these great minds. I look a fright in the photo because I’d been crying out of pure joy and disbelief.  #truestory

Chuck, yet again, was kind to endure my obsession and sit for as long as I wanted to in the pub. Along with our tour of Hever Castle, the hour we spent in The Eagle and Child is a favorite memory.

Eventually we made our way through Oxford a little further before grabbing a Cornish pasty, the most delightful treat in the world, and getting on the road to the Cotswolds.

Driving through the Cotswolds was a no-brainer since we needed to head north anyway, and this particular Area of Outstanding Natural Beauty was somewhat along the way. Known for its quaint towns and charming architecture, we made one stop in Bourton-on-the-Water to walk around.

Bourton-on-the-Water is a favorite stop for tourists, and I could see why. It couldn’t be cuter, especially in autumn.

We grabbed an ice cream cone each and made a quick pit stop before heading north to Newcastle. If ever we return to the UK, we’ll explore more of the Cotswolds and head west to Wales. Fingers crossed!

Up next: An unexpected night with new friends