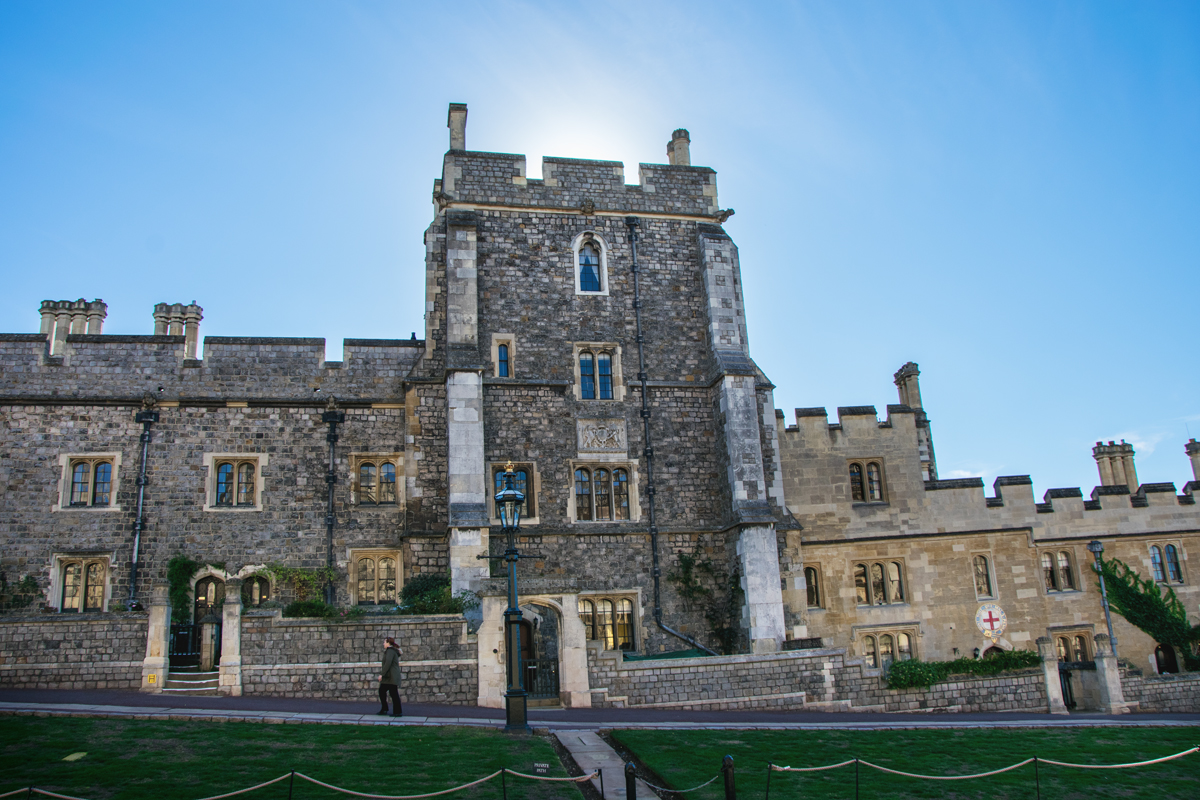 Originally, my plan was to drive to Brighton, then Dorset and up to Oxford, but when I couldn’t find room in the itineraries to visit Windsor, I had to make a sacrifice.

Windsor Castle was non-negotiable when it came to my must-see list, so Brighton was cut. We checked out of our hotel in Kingston-Upon-Thames and headed west.

Windsor was one of the places I checked out prior to visiting to make sure it would be open. With Princess Eugenie and Jack’s wedding that same week, I made sure we could still visit.

The town of Windsor is adorable, with its corridors of shops and little storefronts decorated with Union Jack bunting.

Full disclosure: I didn’t know the Changing of the Guard happened at 11 a.m., but lucky for us, we arrived just in time. People were lining the streets and we followed suit.

A statue of Queen Victoria welcomes visitors to Windsor Castle.

And a portrait of Queen Elizabeth and Prince Philip with their grandchildren (minus Prince Louis) welcomes visitors at the entrance.

The castle is every bit as grand as I anticipated.

Of course, I can just imagine being in this courtyard when Prince Harry and Meghan drove away in that sports car after their wedding…

A marker for Her Majesty Queen Elizabeth I:

View of Windsor from atop the castle:

The castle was stunning, and I only snuck a couple of photos from inside because photography was prohibited. Yes, I was naughty.

The grounds were plenty gorgeous, and I enjoyed walking around the whole property. However, the one specific thing I wanted to see was inside St. George’s Chapel. In fact, I had been counting on it.

Unfortunately, I had to adjust my expectations. Despite the website making no mention of the chapel being closed for wedding preparations outside of October 11 and 12, it was indeed closed to visitors.

I literally had to choke down tears on account of my disappointment. All the monarchs buried here, all the royal weddings that have been held here, the architecture, the heralds and banners… I would not be able to view it all with my own eyes. It seems silly now, I admit, but I really was upset. So as to not ruin the experience entirely, I took a few minutes to readjust and appreciate the moment as it was.

When it was all said and done, we finished watching the Changing of the Guard ceremony and left the castle.

The drive to Dorset took several hours, but I knew the views would be worth it. (What I didn’t anticipate was the level of fitness required to climb to Durdle Door.) Dorset is known for its beautiful countryside and seaside cliffs, of which you’ll be familiar if you watched Broadchurch. We parked at Lulworth Cove and met a British friend/co-worker of Chuck’s for a quick pint before taking on the massive hill that led to Durdle Door.

Though only a mile from one spot to the other, the scope of the hill is no joke. I only thought we were hiking when we climbed the White Cliffs of Dover. Oh no! This was actual hiking. (You can listen to our huffing and puffing on my Instastories.)

Of course, once we reached the top, it was worth it.

To fully appreciate the size, in the photo below, take note of the man standing on the beach and the two girls in the water. Ahem.

Durdle Door is one of the most photographed places on the southern coast. Per usual, I wanted to see it for myself.

It took a few hours for us to hike to the seashore and back, and not just because I was taking pictures. I cannot impress upon you the steep incline and the necessary stamina it took to climb it.

Once we made it back to the car park, we opted to eat a quick dinner – fish and chips, naturally – before taking the long road to Oxford that night.

Up next: Oxford and the Cotwolds