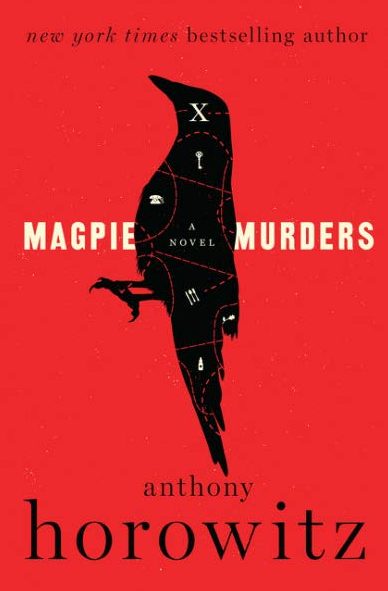 My experience with The Word is Murder was so delightful that I immediately investigated other Anthony Horowitz novels and selected a New York Times bestseller, Magpie Murders, to read next. As I hoped, it too was outstanding and I may have a new favorite author.

Magpie Murders is a double puzzle set up like a frame story (a story within a story). In the beginning, we hear from Susan Ryeland, a book editor who’s just been given novelist Alan Conway’s latest thriller. She has been editing Conway’s books for years, and though she doesn’t care for him much as a person, she enjoys editing his work because he is the best whodunit mystery writer of the time. He has mastered the cozy murder mystery in small English villages, an equation that people continue to love (myself included). His fictional detective, Atticus Pünd, is beloved by readers everywhere. So, Susan introduces readers to Conway’s latest novel with a slight warning, and we dive into Conway’s work. In other words, we step into the frame story.

There’s been a double murder at Pye Hall – first the housekeeper, then the master of the house. Atticus Pünd must untie all the strings to determine who is guilty. Conway’s novel follows a classic Agatha Christie model – a collection of interconnected characters, each with a sliver of a motive. The entire first half of the book is Conway’s novel.

However, just as Pünd has solved the mystery, the book ends unfinished. The last chapter is missing, and that’s when we snap back to Susan, the editor, who’s just been told that Alan Conway, the writer, is dead.

Thus begins the second murder to solve. Not only is Susan frazzled by not knowing who killed the fictional housekeeper and master of the house at Pye Hall, now she has to figure out what to do regarding her client’s untimely death. Susan uses what she’s learned from a career of editing murder mysteries to solve the crime of who killed Alan Conway and figure out what happened to his last chapter.

To be honest, Magpie Murders was a slow start, but that’s only because I didn’t fully appreciate what was going on. From the book summaries I’d read, I didn’t grasp the frame story aspect, so when we skip from Susan’s point of view to the various characters in Conway’s novel, I had to work a little harder to stay focused.

However, once the mystery was fully underway, I was hooked. It was brilliant, and once again Anthony Horowitz wowed me.

If you are a fan of British mysteries, Agatha Christie, and the classic whodunit, you’ll love Magpie Murders.