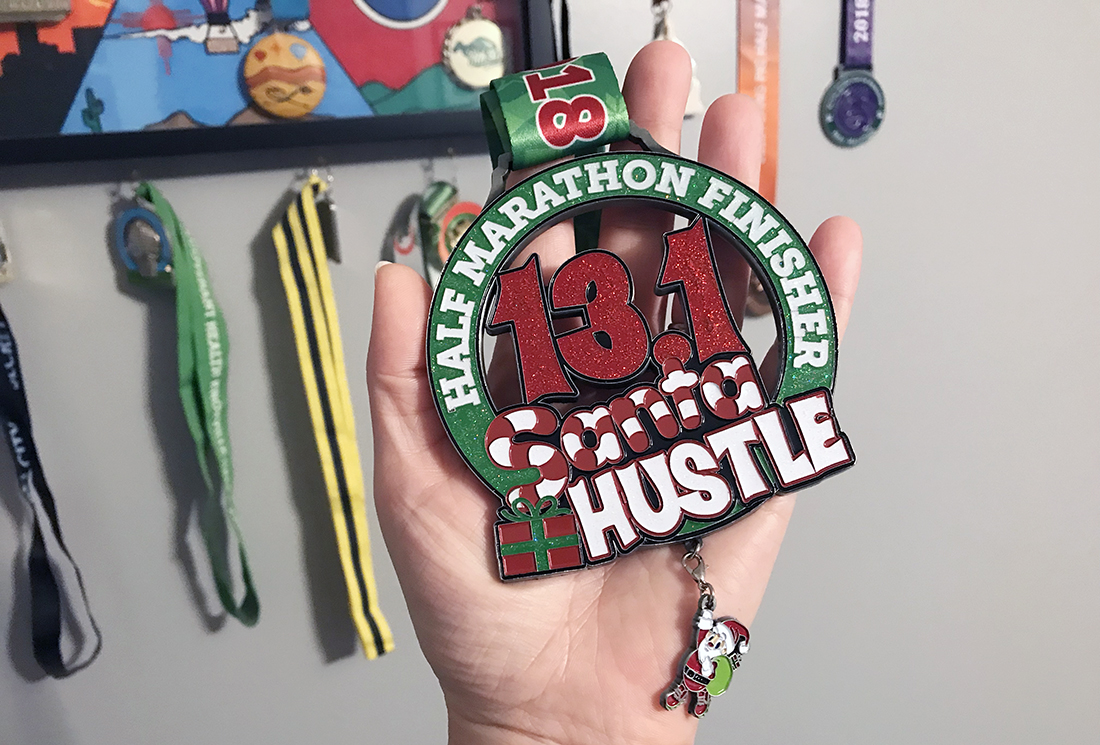 I signed up for the Santa Hustle Half Marathon in the Smokies back in the summer, not yet knowing that I would be running a half marathon in England in October. I’d already met my personal goal of running 20 races by the time I turned 40, so now it is just a matter of running races to run them and bring home another medal.

However, by mid-week, I was seriously considering not showing up on account of the dismal weather forecast.

Those temperatures, when combined with 100 percent chance of rain, felt like a big NO in my book. I don’t run in extreme weather conditions, namely the middle of summer when the heat and humidity make East Tennessee feel like an oven. (I go to the gym and do yoga in the summer.)

By Saturday morning, I was still leaning towards no. The forecast never improved or even shifted. I polled friends on Instagram and the majority said HECK NO, don’t run.

A small few, maybe six or seven, said DO IT.  A few messaged me and reminded me that I’d probably regret it if I didn’t at least try. I wasn’t aiming for a perfect time anyway. I surrendered the fantasy of PRs – personal records – a long time ago. My only goal now is to finish in one piece, and I honestly believe this basic rule to listen to my body has kept me injury-free for the last decade.

I wasn’t alone in the indecision or concern. The race’s Facebook page was busy with about travel worries and racers deciding it was too risky to cross mountains and plateaus to get to Sevierville. A few petitioned the race organizers to reschedule, but if you have any experience with the racing community, you’d know that wasn’t going to happen.

In the end, I went for it. I drove to Sevierville Saturday night and slept at my parents’ house, who’d only moved to the area last week. (Their house is 11 miles from the start line.) When I left for the race at 6:15 a.m., the weather was exactly as predicted – 35 degrees and raining. I upped my positive-self-talk game: “Only two hours of running and then you can take a hot shower. No big deal.”

Attendance was noticeably down from the last time I ran the Santa Hustle two years ago, and it was a bare-bones set-up. No local cheerleading teams or bands, no extra volunteers in cheerful holiday garb to make the event festive. People huddled around outdoor space heaters or stayed indoors. When the race started (late) at 7:35 a.m., people were ready to get the dang thing over with.

The first four miles was uneventful weather-wise. The steady rain had lessened to a light mist, and, once warmed up, the temperature felt nice.

Around mile five, the sleet arrived and hung around for the next three or four miles, properly soaking my legs and feet. I took two missteps and landed directly in puddles.

At mile nine, the sleet morphed into fat, puffy snowflakes, which pelted me in the face for a steady 45 minutes.

By mile 12, I was over it. Done. Soaked to the bone and freezing. By the time I could see the finish line, I could also see – do my eyes deceive me? – my parents parked on the roadside. I waved to them, and they waved back, and then I noticed my mother was recording the Stay-Puffed Marshmallow Woman running her direction. (The white Columbia jacket I bought for our U.K. trip was PERFECT for a long-distance run in wet weather!)

Despite the weather, the Santa Hustle 2018 was still not my worst race experience. The Oklahoma City Half in 2009 still reigns as the absolute worst. My time was a few minutes slower than normal, but I’m still within range of the last ten half marathons I’ve run.

More than anything, I’m glad I did something hard when I was really tempted not to.