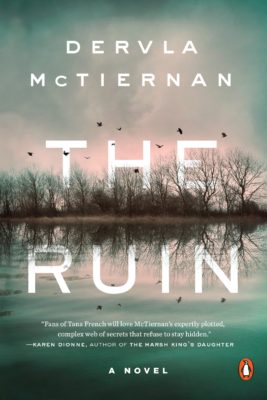 Twenty years ago the body of Hilaria Blake was found in her home. An apparent overdose left her two children – Jack and Maude – orphaned. It was the sort of case that didn’t feel quite right, but when the most obvious conclusion is all you have, that’s what you go with. At least, that’s what Detective Cormac Reilly believed at the time.

Fast forward 20 years and Jack Blake’s body has been found in the river Corrib in Ireland. The police are quick to rule it a suicide, a truth girlfriend Aisling Conroy cannot seem to grasp. When sister Maude shows up to investigate her brother’s death on her own, the heat turns up in Galway.

Recently transferred from Dublin to Galway, Detective Reilly finds himself unearthing Hilaria Blake’s overdose case while grappling with her son’s supposed suicide. Things don’t align. Something doesn’t sit well. There is another link to the story which he resolves to uncover.

The Ruin moves at a swift pace, which I always appreciate. Sometimes I like to dwell in details, but when it comes to thrillers I want to run to the end. I want to untangle the knot as quickly as possible, as long as the author gets her words in. The Ruin impressed me because this is a debut novel. McTiernan was a lawyer in her former life and only jumped into fiction because she loved crime thrillers so much. So yeah, I enjoyed this mystery a great deal, and it was recommended to me since I’m a fan of Tana French, another Irish author.

However, I will tell you that The Ruin is a quicker and more interesting read than Witch Elm, French’s latest, which is currently sitting aside unfinished because the pacing is so darn slow.