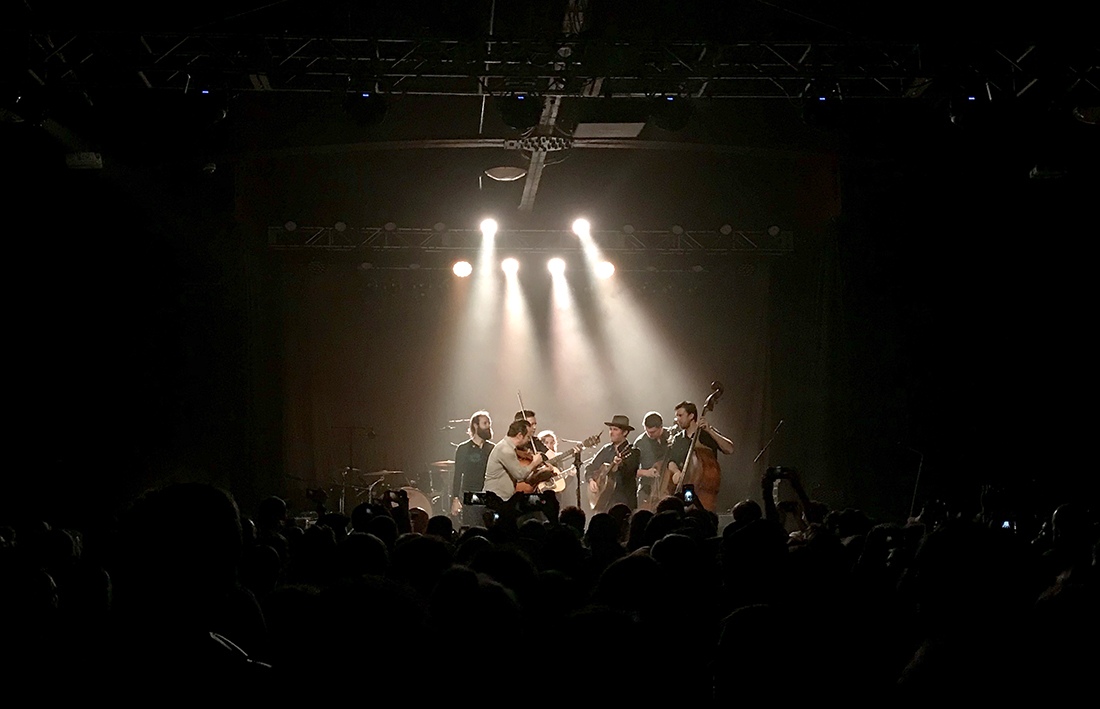 I have a short list of artists I want to see in concert. As a fan of not wasting time or money, I’m picky. There are two bands I will always pay money to see in person: The Killers and Mumford & Sons. I’ve seen both of them twice and will see Mumford again in a few months.

However, there are two other artists who’ve been on my list to see, and one nearly happened last year. I bought tickets for Nathaniel Rateliff and the Night Sweats as a birthday gift to Chuck last year, but a work conflict left us unable to go, so I sold the tickets and put them back on the To See Live list.

The other artist was Gregory Alan Isakov, a singer/songwriter who’s less well known than the other three. I stumbled upon his music in 2013 when I started working on my first novel. I wanted calm, steady background music, and after perusing iTunes for a bit I found “The Stable Song.” That was it. I was hooked.

Several albums later, I listen to his music when I’m driving long distances or settling in for a long bout of work or writing. It soothes me, and I love his lyrics. Until recently, I never considered that I’d catch him on tour near me, but when his last album dropped and I checked the tour schedule, voila! He was going to be in several cities within easy driving distance. I had to make it work.

I bought tickets for the only weekend show I could attend, this one in Asheville. My parents could keep the boys, and Chuck and I could make a weekend out of it. Perfect.

Then came the flu.

Jackson woke up Monday morning with a fever, something that’s happened only a few times in his life. I might be tempting fate here, but we are rarely sick. Maybe once a year? Once every other year? We already had an appointment scheduled on Tuesday to establish with a new family doctor, and funnily enough, it was my suggestion to test him for the flu. (The nurse said it looked like Strep.) It came back positive, and she came back into the room with facemasks.

Wednesday morning Jeremy woke up groggy, sniffly, and that’s when I decided the concert that Saturday was for sure not happening for me. What if we all got sick? What if we starting falling like dominos, one right after the other? I canceled our , told Mom she was off the hook, and wondered how I could sell my concert tickets.

However, by Wednesday night Jackson was fever-free and Jeremy seemed fine. We were all on Tamiflu as a preventative, and the illness I felt confident was coming our way didn’t seem to be showing up. By Thursday night, I was heartbroken, the irony not lost on me. We didn’t succumb to the flu, for which I was grateful, but the upcoming weekend in Asheville was a bust.

Enter my sweet friend, Kori, who offered herself up as a traveling companion along with a hotel room via points. She had no clue who this Gregory guy was, but she was game. I argued with her, stupidly, but then I realized she was giving me a precious gift and I’d be foolish to reject it. Chuck stayed home with the boys (Jackson still had a smoker’s cough), and off Kori and I went to Asheville.

The Orange Peel is a small venue with mostly standing room, though there were a few barstools in the back for those who showed up early. I was not interested in standing for two hours, nor was Kori, and mercifully, there were two stools available when we made it inside.

I kept telling her that it would be a mellow concert, that his music was so chill that you could practically fall asleep to it. Sure enough, at one point during the concert, Gregory joked that he’s popular at preschool naptimes and yoga studios. 🙂

I’d checked the set lists from his previous concerts, and he regularly started with “She Always Takes it Black,” which is a favorite of mine. As soon as he took the stage, he strummed a few lines of music that everyone recognized as that song, and we all cheered.

He played a handful of favorites, and despite a few tall people who kept standing in front of us, I was pleased with the whole event. I’m not sure my phone captured the sound perfectly, but in he sounded just like he sounds on his albums.

The encore was “The Stable Song,” and everyone sang along.

I don’t need to see him again unless he actually comes here (then I’ll want to), but I’m grateful for Kori’s willingness to tag along, for Chuck’s willingness to hang back, and for the opportunity to scratch Gregory off my To See Live list. It was all worth it.